Wolfenstein 2: The New Colossus continues the franchise’s newfound lease on life, proving what once was old can still be as entertaining even after so many years. Following on from the success of 2014’s Wolfenstein: The New Order, Wolfenstein 2 continues to push the envelope of the original with crazy narratives, likeable characters and lots and lots of Nazi killing. 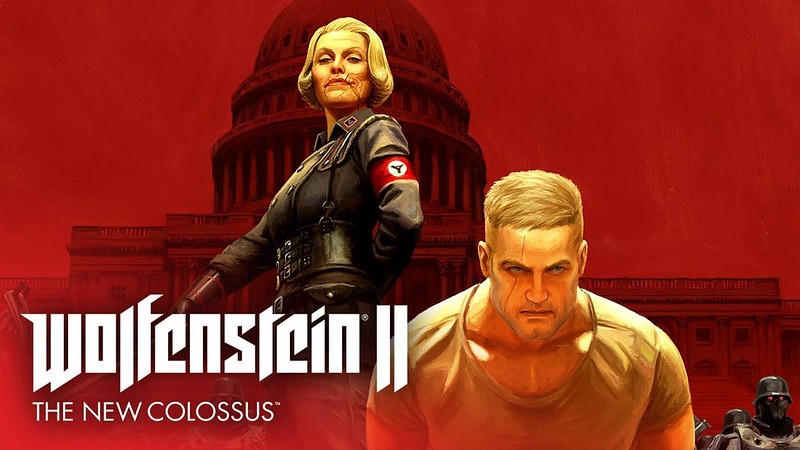 The single campaign is the heart of Wolfenstein 2, and the new world order is an unforgiving and cruel world to exist in. You either come to terms with the skewed beliefs of this twisted reality or fight back and suffer the brutal consequences dished out in a big helping of bloody violence.

Wolfenstein 2 is set in an alternate history where the Nazis have prevailed during World War II and have taken control of the United States. Seeing Nazi and über soldiers donning sci-fi weaponry infused with a hint of retro nostalgia is quite the sight. Set in a racially charged America where white supremacy, homophobia and the Ku Klux Klan is seen as the norm is quite confronting to say the least.

Taking place after the events of Wolfenstein: The New Order, central protagonist William “B.J.” Blazkowicz is back, albeit battered and bruised both physically and emotionally after barely surviving a nuclear weapon at the conclusion of the first game.

After sustaining trauma early on in story (and repeatedly thereafter), B.J. is back to his blistering best with an assortment of firearms in hand. Adding fuel to B.J.’s drive is Anya, his romantic love interest who also happens to be heavily pregnant with their twins.

Developer MachineGames have done an outstanding job with the single-player campaign, really doing a number on your perception of what humanity is capable of, no matter how hard you try to reason with it. Don’t believe me? Try the opening mission and you’ll see what I mean.

Supporting B.J. on his mission to overthrow the Nazi regime is a rag tag group of resistance fighters, comprising of a colourful mix of personalities. In between missions, you can have some down time at the resistance base and explore each of the individual allies. Wolfenstein 2 is more than just about blasting Nazis. You can get insights into what makes these characters tick and maybe even begin to care about their well-being.

The locales are just as intriguing as the supporting cast of characters, offering up fascinating takes on ‘what if’ scenarios. Iconic towns have been re-imagined, from Manhattan following a post-nuclear fallout, to southern New Orleans under strict quarantine gives each environment its own sense of identity and character. Progressing through the chapters doesn’t ever feel stale, with each set piece flowing from one to the next and never outstaying its welcome.

Wolfenstein 2 may be a first-person shooter at heart, but has been layered with so many more facets. Depicting politics and religion, to laugh out humour combined with over-the-top bloodshed, Wolfenstein is far from a generic shooter; in the best possible sense. Of course there’s gunplay, fisticuffs and explosives too, and that portion of the game is also freaking fantastic.

B.J. arsenal of weapons is off the wall, and somehow he manages to keep them all with him at all times. Choose to single or dual-wield firearms, and further upgrade them with an assortment of accessories such as extended mags, scopes, silencers and more. You get the feeling Wolfenstein 2 wants you to unload as much ammunition as you can, which you are more than welcome to do, but stealth killing silently for clean kills is also on the table too. You decide who dies, and how.

Killing is grisly and ultra-violent making Wolfenstein 2 not for the faint hearted. Melee killing Nazis is particularly gory, and the curiosity of the different animations made me want to try different methods, as sickening as that may sound.

Level designs are creative and provides non-linear paths to explore, with many decisions made leading to some form of reward at the end. Genuine thought and care has gone into creating an experience that’s very much yours to take at your own pace and choosing, rather than slapping together hastily just to get a title out the door. Some decisions will also alter the narrative of Wolfenstein 2, but I’m unsure of how much of an impact it had in the grand scheme of things however it does make me want to replay through and go down the other path too.

The difficulty level can be adjusted on the fly without penalty, which was perfect given some fights were painstakingly hard to overcome if I didn’t tweak it down a few pegs. Checkpoints are used to lockdown your progress so you can always scale it up the difficulty curve without fear of having to backtrack later.

MachineGames have stated they wanted to push the creative boundaries with the game, and they most certainly have done so. What other game out there is capable of balancing Nazi killing with sex romps and drug use without coming off as overly perverse or inappropriate?

Wolfenstein 2: The New Colossus will have you talking about it long after the credits have rolled. MachineGames have taken the franchise up another notch; something I didn’t think was possible after the impressive The New Order. Wolfenstein 2 could very well be the sleeper hit of 2017. The gratification of mowing down hundreds and thousands of Nazis while still exploring what it means to be human is finely balanced in this exceptional sequel. Don’t let one fly under your radar.

MachineGames have taken the franchise up another notch; something I didn't think was possible after the impressive The New Order.