Warriors Orochi 3 Hyper brings the battle to Wii U, the first title in the long-running Dynasty Warrior series to grace the newest Nintendo entry in the home console market. Hyper is a expanded port of the original Warriors Orochi 3 released back in early 2012 for (PlayStation 3 and Xbox 360) and as such, with a new hardware and unique capabilities, one would imagine Warriors Orochi 3 Hyper to be the most comprehensive version in the Orochi series thus far. The Wii U release packs together exclusive content and new features but stumbles in technically execution to make it a truly brilliant. 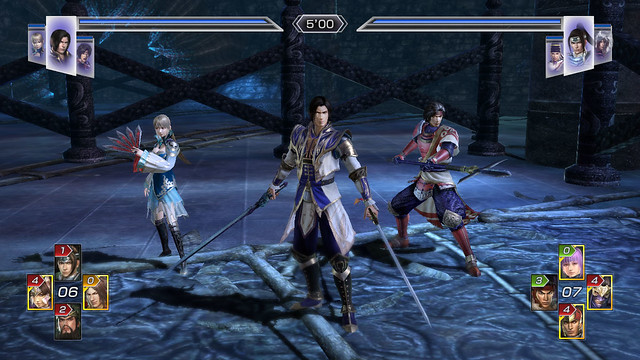 The Dynasty Warriors series has been around since the days of PlayStation 2, tying together the Chinese Romance of the Three Kingdoms mythology with legendary characters endowed with fantastical abilities in such a way that made Asian history appealing to the hack-n-slash gaming masses. The runaway success resulted in the Samurai Warriors series with emphasis on Japanese history as the point of inspiration. Enter Warriors Orochi – an amalgamation of the two with a dashing of Tecmo Koei characters sprinkled with magic, fantasy and completely unhindered by folklore for Tecmo Koei to run rampant with. The series has become a cult hit and its little wonder to see Warriors Orochi 3 being what is likely the first of many ‘Warriors’ title for the platform.

In Warriors Orochi 3 Hyper, the story begins at the end of the tale with the demonic multi-head Hydra slaying all but three of our warrior heroes. A final stand proves fruitless leaving our trio to retreat, seeking alternative means of defeating Hydra and its demon army. Taking on a time-travelling twist, Princess Kaguya offers our remaining heroes the ability to venture back in time to save their friends and in the process, the world. Not the deepest of stories ever written but it does prove to be engaging and inventive as characters can be saved back in time, unlocking new stories and missions for a progression system that much more interesting than most hack-in-slash titles. With only Takenaka Hanbei, Sima Zhao and Ma Chao at your initial disposal and the knowledge of past events, history can be repeated and the tide of battle can be turned in the warrior’s favour. Battles branch into missions with your actions directly influencing how the story unfolds. Pivotal characters can be saved during key battles, with each rescued hero joining your playable roster. Each ally has a special bond tied to one or more characters strengthening the relationship between characters, thereby fortifying your allied forces and improving your chances of success in slaying Hydra. Purists will be please to learn the original Japanese voice acting has been retained with English subtitles.

Keeping with tradition, gameplay contains much of the hack-n-slash elements and flair from the previous Warrior Orochi titles, layered with new features that make solid use of the diverse line-up. The option for preparation before engaging in battles allows players to customise their warrior line-up to produce a well-oiled team of three, equipped with preferred weaponry and armour to tackle the swarm of enemy forces scattered across the battlefield. Each character sports the staple standard, charged attacks and special moves for wiping out a horde of would-be attackers in one fell swoop. Team-mates can be interchanged with a quick shoulder button tap, chaining together character moves for a powerful combination strike to keep the combo tally ticking away. Repetitiveness sinks in on the easier settings with armies easy to dispose of. If you find yourself in a bit of a rut, Hard and Chaos mode offers plenty more variety and challenge. 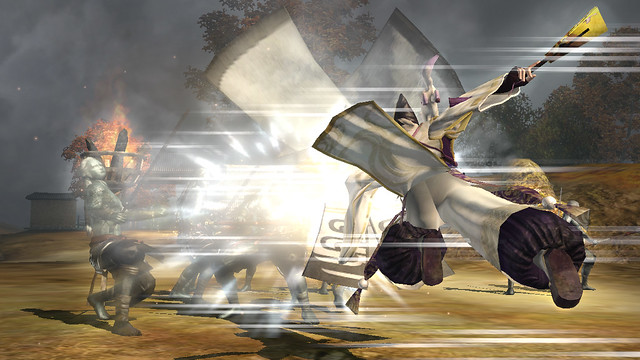 Mission objectives provide direction on each of the many maps, sporadically changing goals in the same fashion as the previous titles. For this reason, the mini map is particularly important for guiding lost champions from one area of the map to the next, and this is where things get a little pear-shaped. On a big screen, this has never been an issue however as the game can be experienced entirely on the Wii U gamepad, the shrink down in size results in a mini-map that is; well, too mini. Local co-op mode does allow for one player to occupy the whole television and the other on the gamepad taking the stress out of navigation but trying to enjoy Hyper away from the big screen can prove frustrating, especially when lost and under time constraint.

One of the largest selling points for porting a game over to Wii U is the Wii U gamepad and the possibility it presents. Hyper never quite takes advantage of the potential with touch-screen functionality and Wii U utilisation starkly absent. There just isn’t enough happening with the interactive gamepad to make it stand out from Warriors Orochi 3 already available on other platforms. There is the option to switch between remote play view and expanded map view, but nothing more beyond that. Stepping away from Wii U capabilities, there are a few choice inclusions that places Hyper in a league of its own. The introduction of “Duel Mode” adds something entirely new to experience for the fans. Duel Mode is essentially a two player three versus three mode, with battles stripped back to a singular, much smaller battleground. If you ever fantasized about what the Warriors Orochi series would be like as a beat-em up, this is as close as it gets. Duel Mode is certainly different, plenty of fun and with over 130 characters (a couple of which are unique to Warriors Orochi 3 Hyper) to choose from, there’s enough content here to keep you coming back for a quick battle or two.

Online co-op mode works well enough but is restricted in some respects. Maps can only be played if you’ve completed them and “recruited” another player to join you. Finding another player searching for a game at the same time as you can prove difficult at times, particularly as the game and console are so fairly new. Hopefully as more people adopt Hyper, there’ll be an influx of willing participants but until then, multi-player mode may be better experience locally.

For whatever reason, the porting process to the Wii U didn’t translate the gorgeous visuals from the original Warriors Orochi 3 quite as smoothly, with a dip in texture quality detracting from the overall experience. Building textures are lacklustre in appearance in a few areas and the occasional slow-down and graphically pop-in compounds the issue as units can magically pop-in and out whilst navigating around a map. Although these occurrences are quite rare, when it does happen destroys any illusion of a well produced product. It hurts me to say this as I do thoroughly enjoy the series, just be warned as it was quite the surprise when it happened for the first time. 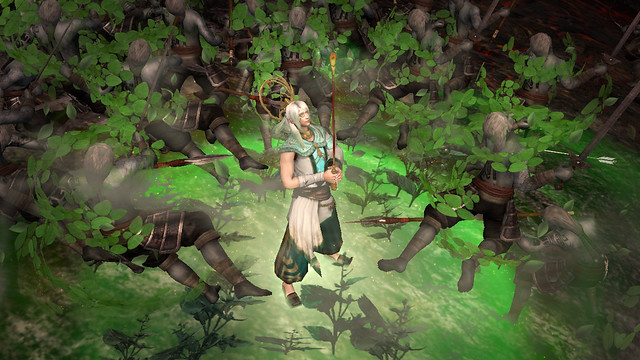 Technical issues aside, Warriors Orochi 3 Hyper is an accomplished title, representing the most comprehensive Warriors Orochi experience currently available. Fans of the series will find plenty to entertain themselves for hours, providing validation for owning (or lusting for) a Wii U. Newcomers to the series will equally delight in the abundance of gaming modes, diverse character line-up and addictive gameplay. It’s difficult to not recommend what is one of the longest running hack-n-slash franchises out there at the moment. Well worth taking a closer look at.