Tinkerworld is in big trouble. The usually peaceful landscape is losing that which once made it such a happy, peaceful place to live. Gone are the days of togetherness and understanding; now replaced with anger, sadness and fear. The division of people through colours is a theme which continues throughout the game’s story, and might just have a thing or two to say about the world we live in by the time the credits roll. 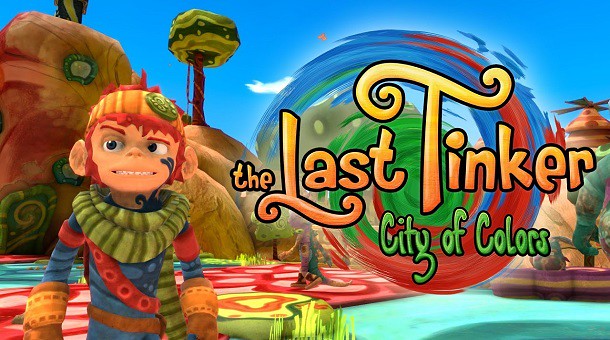 It’s entirely possible that I’m reading too much into things here, and I dare say this aspect only really comes into its own towards the game’s conclusion. It’s a concept that feels somewhat relevant given how people tend to treat each other, but regardless, The Last Tinker clearly intends to appeal to a younger audience and those with fond memories of the early 3D platformers. As the colourful primate Koru, you’ll run, hang, punch and rail-grind across a 7-8 hour journey that’s almost entirely inoffensive throughout.

Indeed, the most offensive thing is likely to be the presentation itself. After a console generation full of greys, browns and muted colours, it’s safe to assume that we’re now looking to be dazzled by the occasional splash of colour and creative vista – things don’t always need to be realistic anymore. That said, Tinkerworld takes some serious getting used to given its insistence on a vibrant palette. Audio is nice enough, but be aware that there’s no speech of any kind barring the first and final cinematics; everything else occurs through speech bubbles and looping squeaks and murmurs. 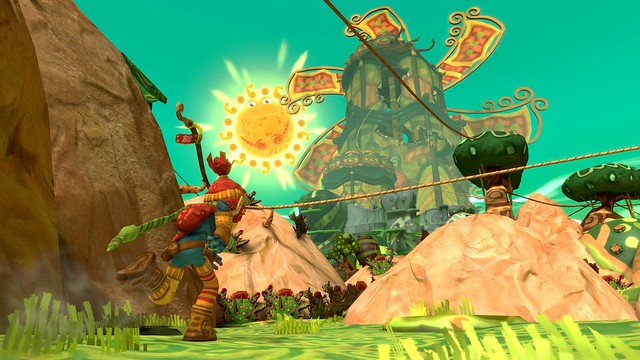 That’s a real shame too, as some moments really would have entertained had they been spoken. It’s far from a deal-breaker, but it certainly doesn’t help when you’re trudging through long stretches without hearing a single word of dialogue. For those who believe I’m nit-picking… you’re probably right, but then Jak & Daxter did begin 13 years ago now. You’ll still find an enjoyable story should you have the patience, especially once you succumb to the game’s charms.

Koru may begin with a simple one, two, three punch combo but soon winds up imbued with the powers of colour. Red increases his combat strength, for example, while green and blue provide abilities which can make a world of difference in battle. Some later foes won’t fall to a simple button-mashing combo, and in this regard real thought has been put into keeping the action fresh. Colour powers are paramount when it comes to turning the tide of the Bleakness – the evil force draining colour from the world and coating everything a lifeless shade of grey. Fans of exploration are welcome to hunt down the golden brushes scattered around the world, as long as they’re happy with rewards like concept art and old staples such as big-head and mirrored-world modes. 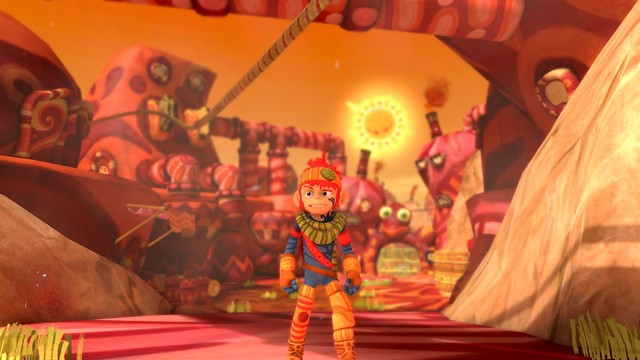 Environmental puzzles involve a giant mushroom named Biggs and his miniature alter-ego, Bomber. Each form possesses a specific reaction when struck with a specific colour; it’s a system that might irritate in its simplicity at first, impress as it develops, before wearing out its welcome towards the final act. One late mushroom music mini-game is needlessly repetitive (and I’m not entirely sure how I completed the last part) and rail-grinding’s controls feel extremely delayed. Overall though, The Last Tinker does a decent job of keeping the flow and moving things on at a snappy pace.

Despite its often garish appearance and lack of speech, this realm of colour is densely populated and bustling with life. ‘Kid Mode’ ensures it’s a great one for children, while those old enough to remember the great games of the past will get a kick from its nostalgic vibe and modern mix of play styles. To reiterate, The Last Tinker is largely inoffensive – no one dies, violence is minimal and checkpoints are frequent enough to prevent frustration. With the visuals of an older game made HD, there’s nothing remotely next-gen here, but at a low price and with a length comparable to many full releases, we could all do with a visit to this world of colours. 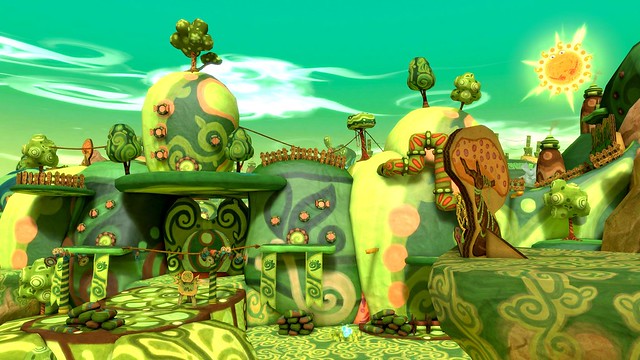