Beta than the original.

Star Wars Battlefront II Beta is here and boy it is an impressive showcase of what’s to come when the game officially launches this coming November. Many facets of the original Battlefront have been improved, with more content promised by EA this time around. If you had lingering doubts on your mind based on the original, Battlefront II looks to be a step in the right direction. 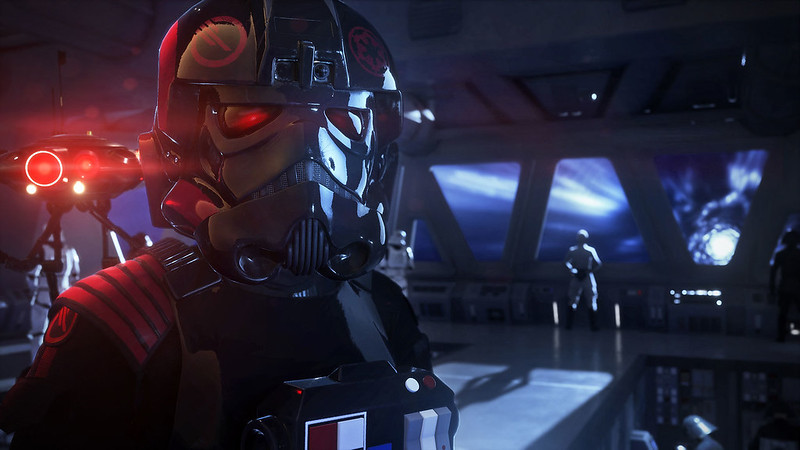 The Beta features four different game modes with limited map choices for each, which is fair enough given the main purpose is to provide a taste test of the game, while stress-testing the multi-player component.

The game modes available include Galactic Assault, Starfighter Assault, Strike on Takodana, and Arcade on Naboo.

Galactic Assault is a 20 vs. 20 mode with the Naboo Theed map the only available map to sample in Beta. Playing as either a Clone Trooper or a Separatist Droid, you will be fighting for control of the royal palace.

Battlefront II introduces Classes to the game with four available to choose from – Assault, Heavy, Officers, and Specialists.

Each class has different powers and tailored for specific purposes. Assault is a balance ranged trooper perfect for mobile firepower and closing gaps on enemies. Heavy is as the name implies, a brute-force class for providing weaponised support, ideal for taking territories and holding them. Officers are a support class, deploying turrets and buffs for allies to cover flanks and choke points. Specialists are your sniper-type character with long-ranged weapons and traps tailored for eliminating threats from a distance. 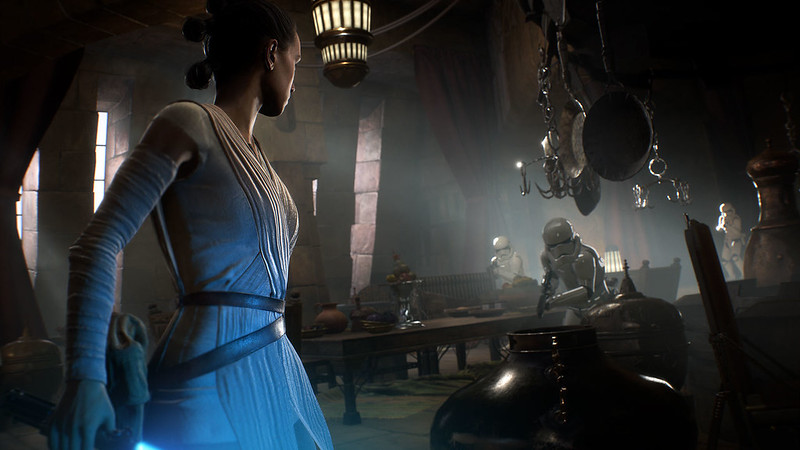 Of all the classes, I found Assault and Heavy units the most enjoyable to play, due to their versatility and how easy each class were to jump into. Officers and Specialists required a bit more patience to adjust to, despite each unit playing very similar to an engineering and sniper class respectively. After each death, there’s an option to change classes to better suit your team’s situation.

Defeating foes earns Battle Points which are used to upgrade reinforcements, summon vehicles, or take control of a key character from the Star Wars universe. These hero/villain characters lay waste to just about anything in their way, cutting down opposition like only a Jedi can.

Nothing quite matches the feeling of jumping into a battle with Darth Maul, slicing away with your light saber and using the force to choke and hurl anything that breathes.

Galactic Assault is one of my favourite modes as it’s essentially an all in brawl.

In Starfighter Assault, players will join a squadron doing battle over Fondor, either helping to defend an Imperial Star Destroyer or trying to destroy it. There are three new starfighter classes as we as Hero Ships spanning the original, prequel, and new trilogy. 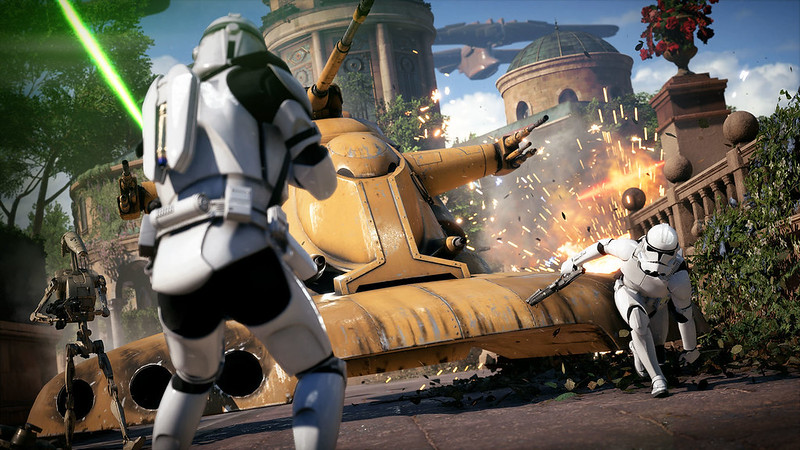 Battlefront II has tweaked the controls from the original Battlefront, where you have more direct control over manoeuvring and targeting. It takes a little getting used to, as you’ll mostly be aiming at where your target will be rather than where they currently are, with the action frantic and intense at all times.

Strike mode features a new Takodana map, where you’re in command of a member of the Resistance or First Order, battling it out for Maz Kanata’s castle. Strikes are locked to Classes only with no Heroes. It is more of an objective-focused mode where you need to work alongside your teammates and select your team composition accordingly. A fun mode, although best played with friends as I found myself losing more games than not whenever I chose to PUG (Pick Up Group) with random players.

The last mode available during Beta is Arcade Mode. Set on Naboo, play by yourself or with a friend taking on AI opponents. Arcade feels very much like a survival or horde mode from other titles, working your way through various scenarios against foe after foe. For PlayStation 4 and Xbox One, there’s even couch co-op for you to play alongside a friend on the same television.

Playing the different modes earns you XP and credit based on your performance. XP increases your level while credit can be used to purchase crates filled with random in-game content, including Star Cards, crafting materials and credits. Star Cards come in differing rarity and can be further upgraded for added effects. Star Cards are more functional than previously and are your main method of improving a Class or Hero, equipped into slots to modify an ability or enhance one. 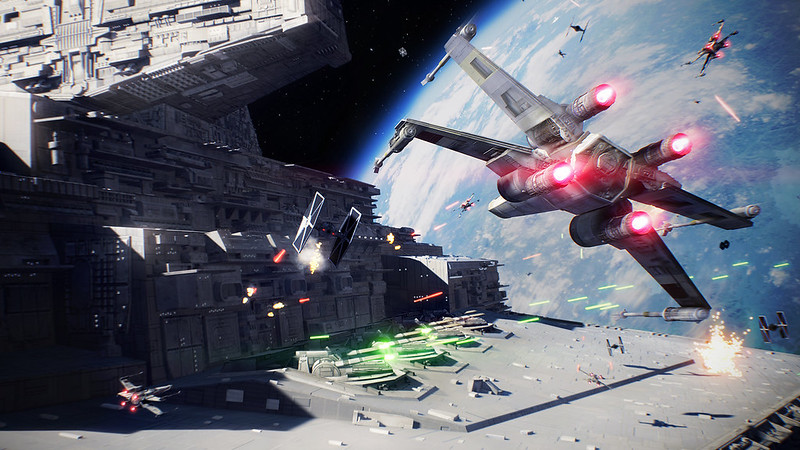 There is already some debate on whether or not this new loot crate will change Battlefront II into a pay-to-win experience. Although micro transactions were not available in the Beta, it will most likely become a part of the game in the final release. How much of an impact this will have is still up in the air, but even titles like Overwatch have micro transactions and can be enjoyed without pumping extra cash into it. Time will tell if Battlefront II can thrive in the same manner.

After the criticism the original Star Wars: Battlefront received for omitting a single-play campaign experience, Battlefront II will have a solo gaming mode, although it wasn’t available to play during the beta. There was a teaser trailer to take a look at what’s to come, but it looks like we’ll need to wait until launch to learn more about the new campaign mode.

So far EA have revealed the campaign will feature a brand new story arc as seen from the Imperial Forces point of view. Set after the fall of the Emperor and playing as Commander Iden Versio, daughter of Admiral Garrick Versio, watch as Iden becomes a member of Inferno Squad and rises through the ranks to become one of the Empire’s elites. 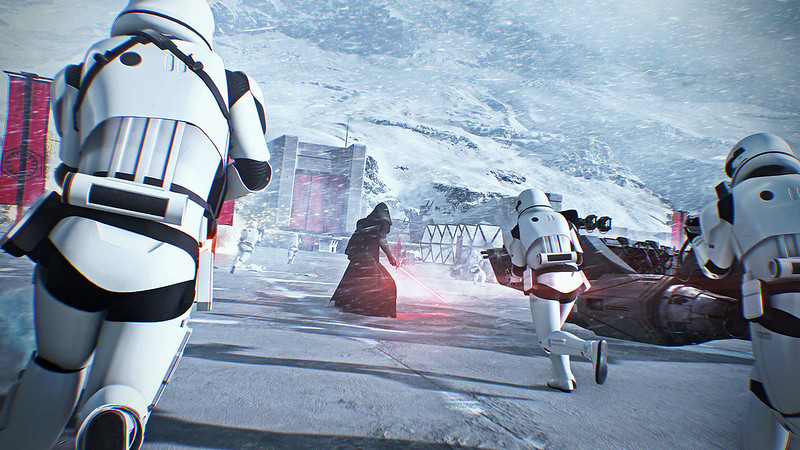 Watch the trailer below to get a better insight of what’s to come:

Battlefront II looks promising. The multi-player experience is technically sound and the inclusion of story-driven campaign is a massive step in the right direction. Visually stunning and the music and sound effects are on point. Based on what I’ve experience so far, Star Wars fans should have very little to complain about this time round with Battlefront II addressing many of the issues it suffered from the first time around. There’s still the massive questions mark regarding crates and how it will be handled (namely pricing and impact) but we’ll have to wait and see.

Anyone that participates in the Beta also will receive a Founder’s Crate for the retail release, containing credits, an exclusive Darth Maul emote, and a rare trooper Star Card to get you started when the game officially launches. Star Wars: Battlefront II has been extended until October 11th. If you missed out on the beta, the game will be available from November 17th, 2017 for PlayStation 4, Xbox One and PC.