The Game Bakers’ Squids series has already carved success on the mobile platform with the original Squids and Squids: Wild West. It seems only natural progression for a title with lush visuals and kooky character design receives a port on to the Nintendo Wii U platform. Tweaked for gaming consoles, Squids Odyssey retains its charm, with a gentle helping of features for first time calamari adventurers. 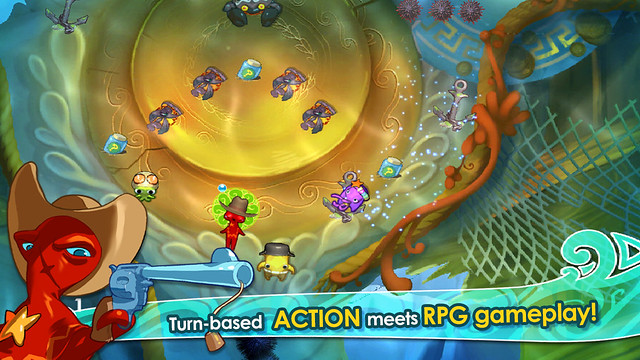 Squids Odyssey is a comprehensive compilation including the previously released Squids and Squids: Wild West, tweaked and enhanced for the Wii U gamepad and unique control scheme. Odyssey goes beyond the series with an all-new campaign for fans, the introduction of a new hero and new wearable helmets.

This hybrid RPG, strategy adventure throws together a colourful cast of likeable cephalopod heroes who must save their underwater homes from a mysterious black ooze corrupting the other marine wildlife. To tackle the dangers that lurk beneath, you’ll fling their soft spongy bodies at enemies, similar to a game of billiards. It’s a matter of dragging your finger and letting go on the touch screen to launch a squid, although the stylus and left stick for aiming does improve overall targeting. 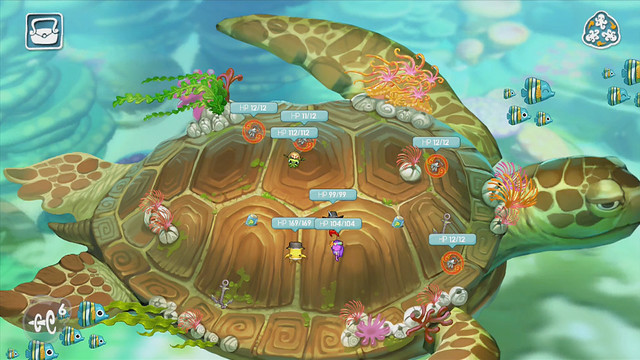 On face value, the gameplay mechanics are deceptively simple however each squid has a set amount of stamina which is expended with every action, adding a touch of strategy to everything you do. As fun as it is to flick your merry band at everything in their way, the turn-based system makes planning and precision a must for ensuring your team are fighting fit by the end of each battle. Placing your squid at a distance to reduce damage during an enemy phase before launching an all-out assault pays dividends in the long term, particularly towards the more tactically challenging stages at the tail end of the campaign.

Environmental hazards such as spiky obstructions and bottomless holes adds further challenge, as its never a nice feeling to watch one of your hapless squid companions plummet to their watery deaths. The environments can also be used to your advantage, prodding enemies to the bottomless pits with a well-placed nudge.

Adding a touch of complexity to the characters are the four different classes, offering perks and bonuses. Scouts have greater movement capacity, Shooters are equipped for long-range assaults, Troopers can knock back enemies and have AoE (area-of-effect) attacks for crowd control, and Healers… heal. Classes aren’t unique to one particular character so you can mix-and-match your favourite squids to create a team that suits your style. Stat bonuses can be added through the course of play via the in-game Pearls you collect, adding a hint of RPG but nothing overly in-depth. Pearls are a versatile currency that can also be used on restoring stamina and in-game items. 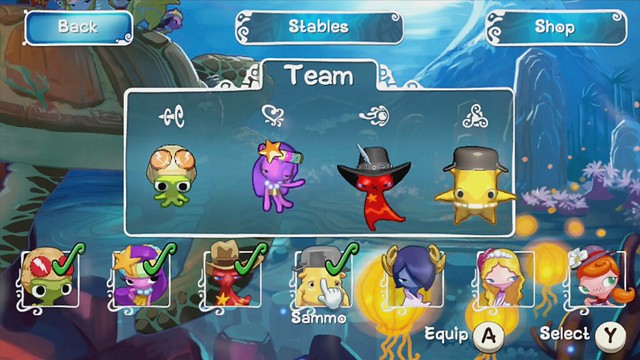 In the mobile version, Pearls could be purchased with real-life currency; however that isn’t the case with the Wii U version, thankfully. Pearls are plentiful so you won’t be left wanting; particularly if you’re a completionist looking for all those hidden treasure troves of glistening plunder. Squids Odyssey retains the same Hat system of its predecessor, where equipping a stylish new brim will bestow extra stat modifiers. You can permanently increase a squid’s stat by ‘transferring’ the stat boost from the hat on to the squid; however you won’t be able to transfer it back if you change your mind. It’s a peculiar design choice, offering players flexibility depending on how they want to play the game.

Squids Odyssey is both a standout in both graphics and audio. The art style adopts a charming cartoony look which suits the family friendly nature of the Wii U. Even playing on the smaller GamePad doesn’t detract from the visuals too much. The backgrounds are literally a sea of colour you that resonates with the light-hearted and bouncy tunes you’ll still be humming long after the adventure is over.

Squids Odyssey balances its cutesy visuals with just enough strategy to keep things interesting across the 90+ levels of gameplay. It’s a thoughtfully put together title that does plenty with what is essentially a basic premise at its very core. If you’re looking for an eShop title worth its weight in pearls, it’s hard to go past this revised compilation for the Wii U. 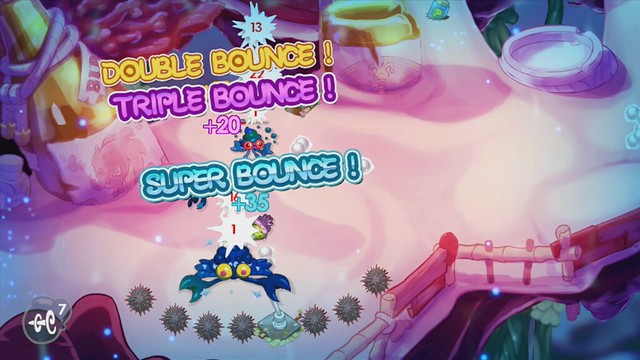 If you’re interested to learn more about each of the individual titles, you can read also read our Squids and Squids: Wild West review for mobile devices.