Hi-Rez Studios’ SMITE and Paladins will be coming to the PAX Arena at PAX Australia this year.

Taking place on the massive PAX Arena stage, the top four teams in the Oceania region for SMITE will compete for a share in $35,000, and the right to represent our region at Hi-Rez Expo (HRX) in Atlanta, this coming January. 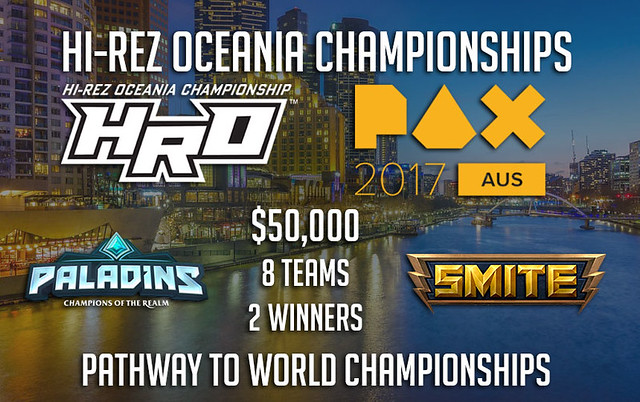 Joining SMITE for the first time at PAX will be competitive Paladins, with the top four Oceania teams from Phase 2 of the Paladins Global Series competing for $15,000 and a spot at HRX.

Matches will be held on the PAX Arena booth Friday afternoon and all day Saturday, featuring the top OCE players and casters. There will be opportunities for freeplay hands on with Hi-Rez Studios titles including the brand new digital card and strategy game, Hand of the Gods: SMITE Tactics.

“We love coming to Australia, and this will be the second time Hi-Rez has been to PAX Australia. We’re excited to bring the finals of the SMITE Oceania Pro League and Paladins Global Series Oceania to the fans, and proud to have our finals in the home of sport in Australia, Melbourne,” said Steven “HiRezCooper” Cooper, Hi-Rez Esports Manager.

Joined by a SMITE Pro League caster, Steven returns to Australia for the third time this year. Front runner Oceania Paladins team Kanga Esports continue to vie for a grand final on the world stage, and SMITE’s Legacy Esports are looking to make their HRX debut following their triumphant victory at the mid year finals. Hi-Rez and Double Jump look forward to welcoming fans to experience top level esports first hand as part of PAX Australia.

Hi-Rez games were a key part of PAX Australia’s esports offering in 2015, and returns with $50,000 on the line, and two teams heading to Worlds in the US
About SMITE Season 4 – SMITE Oceania Pro League 2017.

If you’re keen to check out the SMITE Oceania Pro League, you can turn into the live Twitch broadcast every Saturday from 7pm AEST at www.twitch.tv/HiRezTV

Oceania matches are broadcast as part of a global calendar of Paladins on Facebook, live every Thursday from 7.30pm to 10pm AEST, catch all the action at https://www.facebook.com/paladinsgame/

Teams can sign up for Paladins Global Series Oceania Phase 1 Week 1 via the following link http://bit.ly/PGSOceSignUpP1W1