When I heard Ruiner was set in a cyberpunk universe, it immediately piqued my interest. Cyberpunk titles are few are far in between. There’s just something about a dystopian future where hacking and cybernetic augmentation just captures my imagination. Shadowrun and the Deus Ex series come to mind when thinking of titles that have pushed the envelope of the genre. Ruiner may not be the most defining of the lot, but it delivers an intriguing story, rich atmosphere and explosive gameplay in a fun package. 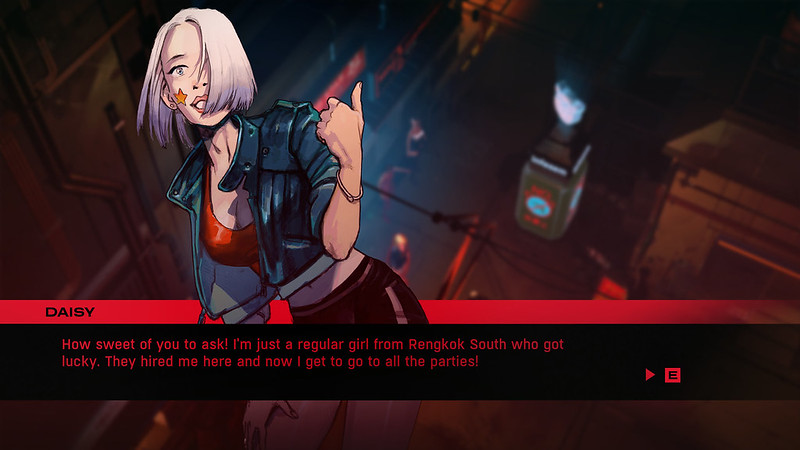 Set in the year 2091 in the cyberpunk metropolis Rengkok, you play as the protagonist Puppy; suffering from a case of amnesia. Clad is a full facial mask with an LED text display, our faceless hero is out to retrieve his kidnapped brother with the help of a mysterious female hacker known only as Her.

The story is ambiguous to start off, with more details unravelling as you progress through the fifteen levels of Ruiner. Levels are broken up into stages where you’ll have to face off against a wave of enemies before a new section ups to you. It can get a bit repetitive as levels do look very similar and rarely, if ever deviate off a linear path. There are some side quests available from NPCs in Rengkok but it feels more like padding to a short campaign that struggles to crack the 10 hour mark.

The ability upgrade tree is rich providing plenty of customisation to suit your play style.

Gameplay is played in a top-down isometric view. Puppy is controlled in a dual stick arcade style format – the left for movement and the right for turning direction. It is a little cumbersome at first, especially when you’re trying to target an enemy with the right stick. It can be trouble to hit a target with a projectile weapon that I found myself resorting to melee attacks more often than not. 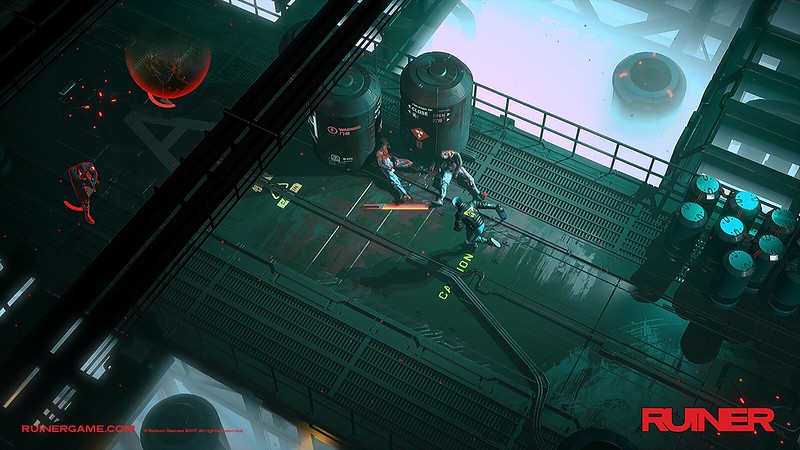 Boss battles are a stand out, with most requiring some form of tactic in order to dispatch the set piece adversary. Standing still and firing is only going to get you killed, as is running in for close-quarter melee attacks. This is one of Ruiner’s strengths, throwing up intriguing challenges that take a bit of trial and error to overcome.

The ability upgrade tree is rich providing plenty of customisation to suit your play style. You can also remove points within an ability to add elsewhere when the situation arises, and that does happen often when you need a certain style to tackle a difficult boss fight, which leads me to my next point. Ruiner is hard.

The soundtrack suits Ruiner to a tee, from the brooding music as you navigate an assembly plant, to the eerie electro-synth tunes while you go about business in Rengkok.

Unlike other games in the genre, rather than spamming you with lots and lots of enemies that chip away at your health, Ruiner throws in a handful at a time, but each enemy can hit like a truck if you aren’t careful. Some bosses will kill you in a spray of grenades or a single energy beams, and before you know you’re nothing more than a splatter of blood and body parts. Ruiner is challenging, and even on easy mode is no cake walk. 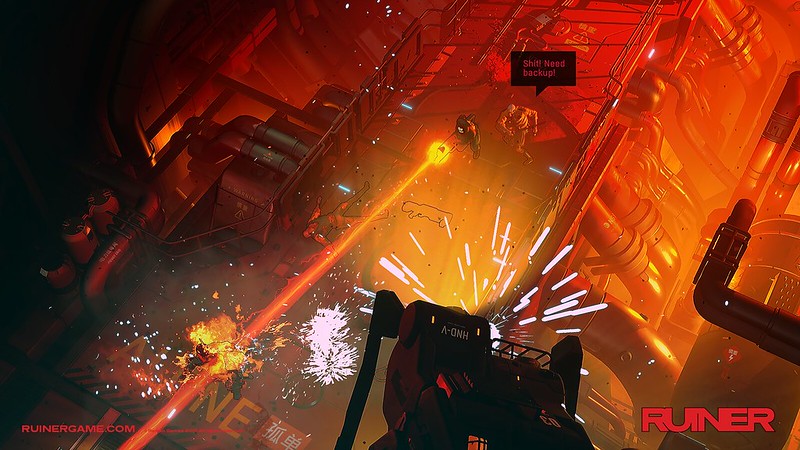 The design aesthetic is predominately black, with Ruiner making exceptional use of shadows and lighting effects. Red hue overlays earlier levels, which I imagine highlights Puppy’s hunger for vengeance or descent into madness, or possibly both. The art style is sublime, especially the character designs for the supporting characters and enemies. Even the NPCs are particularly stylish. I only wish there were more of it.

The soundtrack suits Ruiner to a tee, from the brooding music as you navigate an assembly plant, to the eerie electro-synth tunes while you go about business in Rengkok. Tracks are backed with accompanying sound effects such as police sirens, signal distortion and some light vocal backing. It plays into the whole cyberpunk theme very nicely.

There’s minimal voice-acting in Ruiner which is a shame, with characters only having a catch phrase or no voice work at all. The narrative is dialogue heavy and the illusion of polish slowly diminishes when you start spotting the odd spelling or grammatical error. If more characters had voices, it would have given Ruiner a bit more personality. 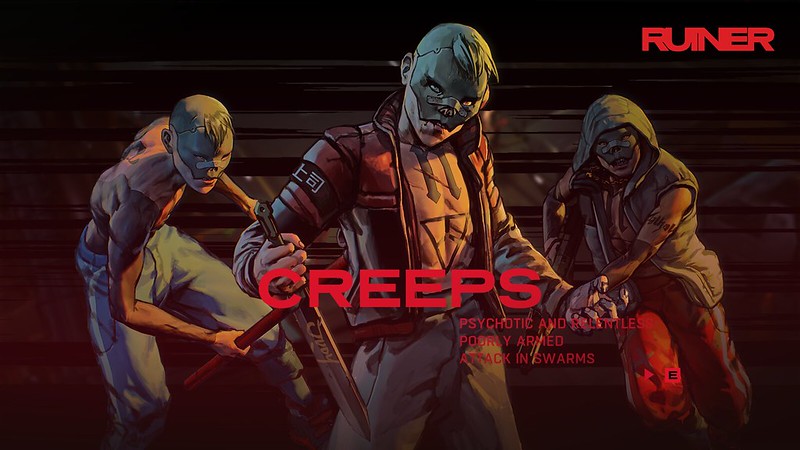 Ruiner is a solid debut title for Reikon Games. Gameplay is frenetic and the array of weaponry is varied. Where Ruiner falls short is the lack of depth in level design and the overly short campaign. Levels quickly become repetitive and linear, with the game drawing to a close when things just start to pick up. Given Ruiner’s focus on the story-driven narrative, there’s very little reason to re-visit the game once you’ve finished the story. If you’re a fan of cyberpunk titles, Ruiner is worth taking a look at but for those who enjoy more in-depth titles with replayability, you may be best waiting for a discount before diving in.

Ruiner is a solid debut title for Reikon Games. Gameplay is frenetic and the array of weaponry is varied.