Resident Evil: Revelations was first released last year as an exclusive title for the Nintendo 3DS and proved to be a quality Resident Evil experience. Unfortunately being relegated to a single platform release meant many gamers may have missed out on this portable horror gem.

After the mixed reception and lacklustre showing from Resident Evil 6, Capcom have ported Revelations over to the home console and Windows PC for more gamers to enjoy, and possibly as a sign of redemption for the Resident Evil franchise. Revelations is set between Resident Evil 4 and Resident Evil 5, a perfect point in the Resident Evil time-line to develop a plot on fan favourites Chris Redfield and Jill Valentine, plus introduce a few new-comers to the franchise. Bioterrorism Security Assessment Alliance (BSAA) sends our veterans along with new partners to investigate an ill-fated cruise ship and take on the rather naughty Il Veltro organisation.

In terms of gameplay, it feels like Capcom have made a conscientious return to their horror roots in some regard. One of the main gripes most gamers had with Resident Evil 6 was the over-the-top action sequences that detracted from the survival horror element. In Relevations, your immediate areas of exploration are more confined than ever, making it the ideal setting for tense and increasingly spooky environments to wander around in. The atmosphere is thick with the stench of fear and if you want to be scared to your core by a Resident Evil title, Revelations will give you plenty to shiver about. It’s refreshing and is the much needed invigoration the franchise needs. 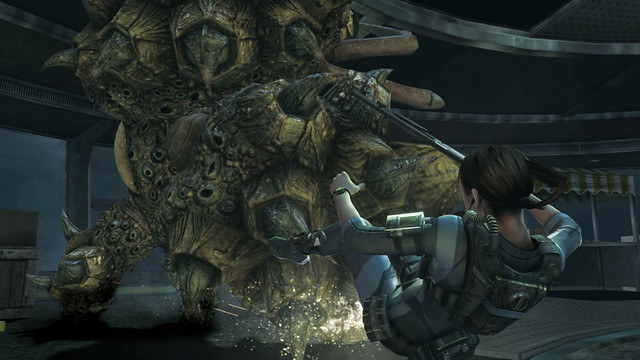 Enemies are slow-moving like before and shuffle towards you in a lumbering manner, giving you plenty of time to land that shot plum on their weak point. Complacency can quickly turn to desperation as long-time players of the franchise can attest to. Revelations keeps with the formula and throws in plenty of zombie types to keep you on your toes at all times. The variety of boss battles help to mix things up with many larger scale battles requiring tactics and well-placed and timed attacks to overcome.

Being a port from the 3DS to higher quality devices is certainly different and doesn’t happen often but thankfully Capcom have done a pretty darn good job of bringing Revelations to the HD platforms. Layered backdrops, lighting down creepy corridors and environmental textures are presented well, creating the illusion of an overrun plagued water frigate. Character models look fairly decent, but there is a hint of sheen to them that can make them look a tad shiny and model-like under certain lighting conditions. Sadly, it isn’t all smooth sailing in Revelations as the storyline isn’t very coherent. As Revelations is based on more than one protagonist, it stumbles with the plot transition between the different teams that can detract from how immersed a player will, or can feel invested in the game. The incessant bouncing around between characters takes me back to Resident Evil 6 and that most certainly isn’t a good thing. Perhaps less playable characters or more centralised development on a single protagonist could have been better. The manner in which Revelations wraps up also leaves plenty to be desired.

Thankfully this time round, characters are able to move and shoot at the same time. Despite some improvements the control mechanics do come across a little clunky when it comes to timed dodging. At times, it’s actually less frustrating to take a hit and heal later than to attempt a dodge and fail. The inclusion of a map helps with navigation and the layout of some areas will have completionists exploring for quite awhile before deciding to move on to less bloody pastures. 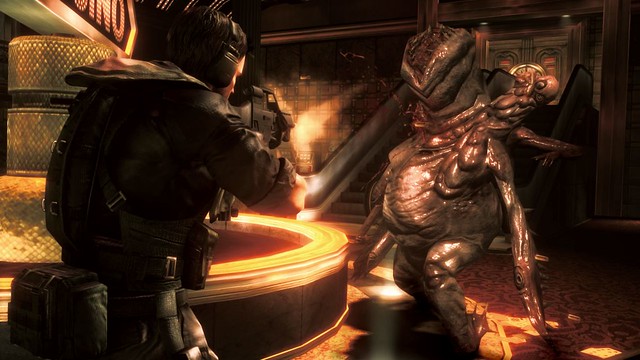 Being a port from the Nintendo 3DS, there is the loss of touch functionality. The little touch-based control mini tasks were a novel inclusion in the handheld version and you can’t help but feel like some of the ‘fun’ is missing with the home console version. It can’t really be helped when Revelations was created with the 3DS in mind and retrospectively porting it over may not be optimal, but still a valiant effort at the very least.

The port does benefit from the inclusion of Raid Mode, a mode where the difficulty is increased to insane levels for the hardcore players. Franchise faithfuls will note the similarity it has to Extreme Battle Mode. Raid Mode can be played solo or as a team, with the objective to get to the end of the map in the fastest time possible and dealing as much damage as you can in the process. Scores are awarded that may keep players coming back for more but will prove to be repetitive in the long run. As always, trophy and achievements are now supported on the HD consoles and PC version giving incentive to re-visit, or experience Revelations as much as possible. Resident Evil: Revelations is a superior survival horror experience compared to Resident Evil 6 that it isn’t even funny how much more I enjoyed it. The tension it builds and the well-crafted balance of visual and audio sent chills down my spine during so many moments. Even thinking about it now still leaves me traumatized and that’s how it should be. It’s a blessing Capcom have chosen to spread the good oil with Revelations being available on more formats and if you love the good old days of Resident Evil classics, this is a title you need to experience. It isn’t perfect but it’s definitely getting there.