Paladins is the latest title developed by Hi-Rez Studios, the developers behind the popular MOBA game SMITE. Having achieved huge success with SMITE, Paladins is a departure from the MOBA genre as Hi-Rez Studios attempts to prove they are more than just a one trick Infernal Mount.

Paladins: Champions of the Realm 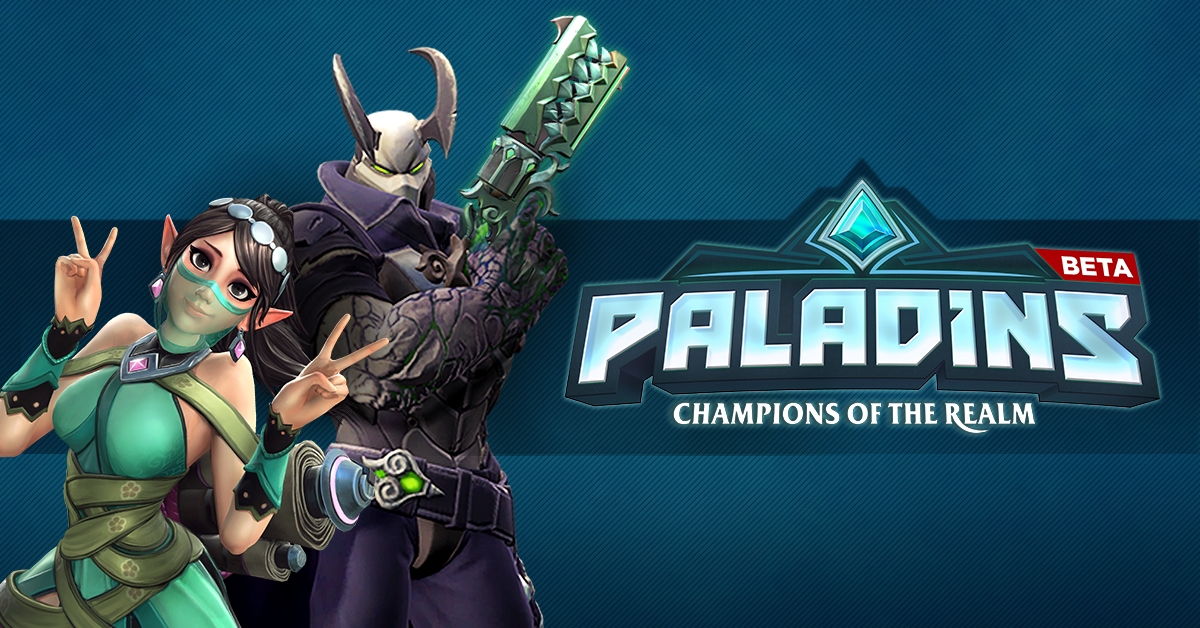 Set in a gorgeous, colourful sci-fi fantasy realm, players take control of a Champion where they’ll need to work in a team to achieve objectives in a variety of game modes. Paladins is a first-person shooter and each champion is distinctively unique, despite being categorized into four types – Front Line, Damage, Support and Flank.

There are currently 18 different Champions to choose from, with more being introduced regularly. Players start out with access to 8 Champions initially, unlocking the remainder through play or in-game purchases. Each champion comes with their own unique weapon, abilities and fighting styles. Utilising 4 different skills exclusive to a champion plus one Ultimate ability, there’s plenty of variety no matter who you decide to play with.

Although Barik and Fernando are both Front Line type characters, Barik makes use of a stationary barricade and attacks with a blunderbuss and deployable gun turrets, while Fernando uses a flame-throwing lancer and a mobile shield. As a result, you’ll find yourself having to adapt your play style from character to character. 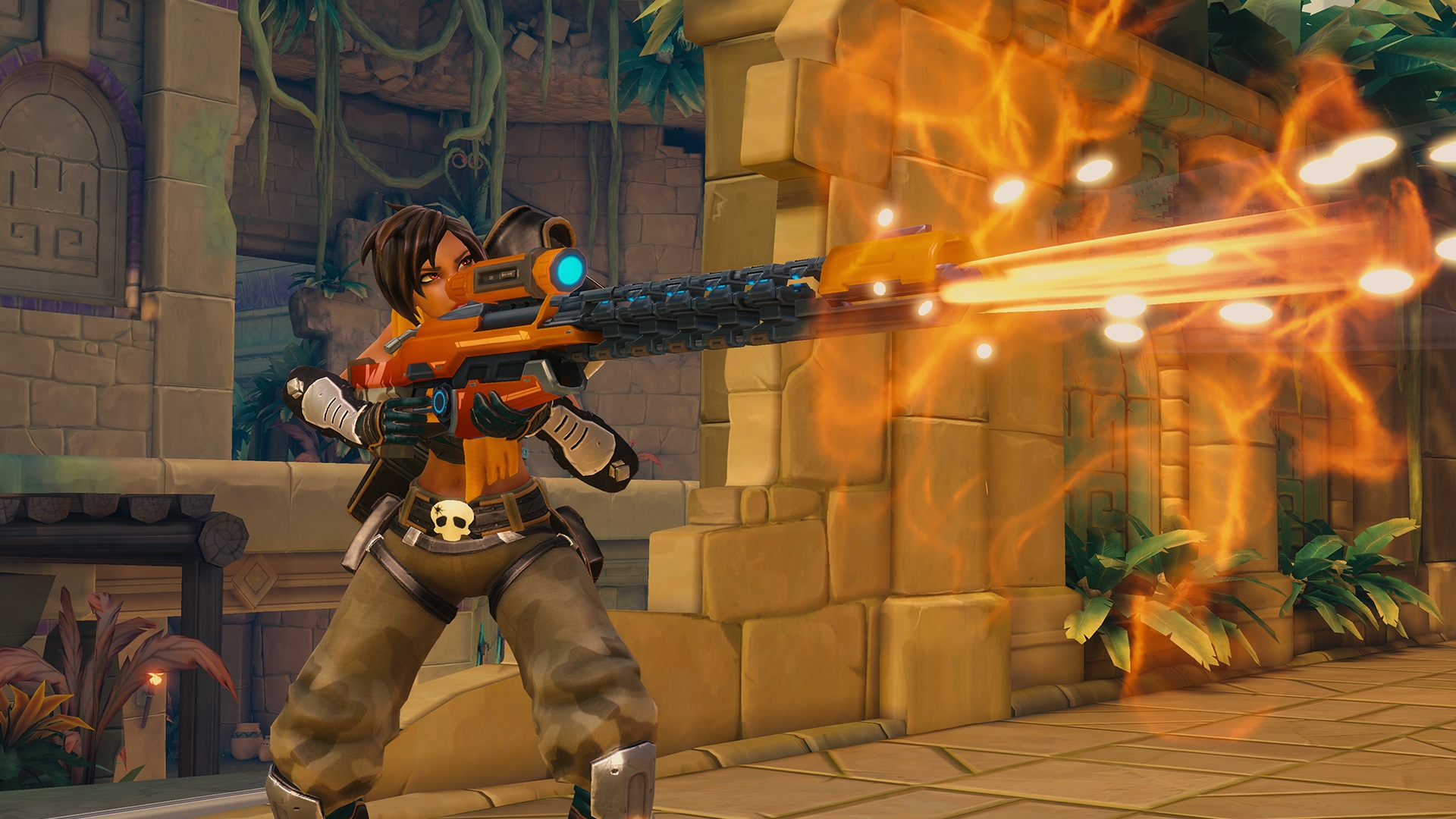 There are currently two game modes available in Paladins – Siege and Payload. Payload is an attack and defend style mode split into two rounds. One team will need to escort, or ‘push’ a payload of stolen treasure to a drop point near the defending team’s base while the defenders try to hold them up. After round one, the objectives switch between teams and after two rounds, the team that was able to push the payload the furthest wins.

Siege is similar to Payload, except the payload itself will spawn in a central location on the map. The first team to hold the location and fill their progress bar first spawns a payload and earns one point for their team. Once the payload is active, the game mode is essentially Siege mode. The winning team will win themselves a point. First team to earn four points wins the game.

Although both game modes seem simplistic at first, matches in Paladins can quickly escalate to intense and competitive games. Determining team composition and when to unleash an Ultimate ability can be the difference between winning and losing. Helping each other and working in a team is pivotal to success. 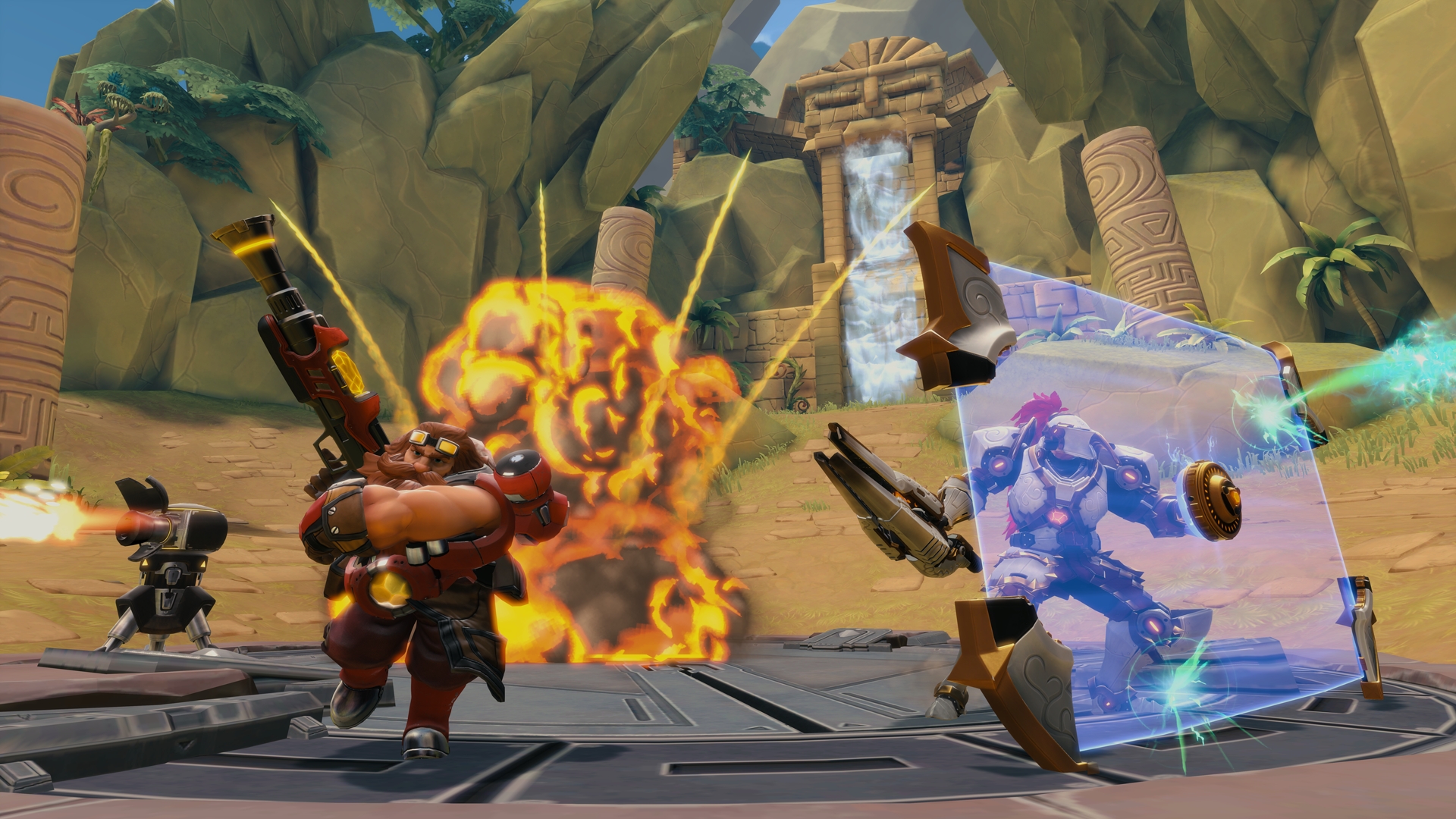 So You Missed Out on the Zelda Majora’s Mask Limited…

Paladins often draws comparison to Blizzard’s extremely popular Overwatch, and it’s very easy to see why. From its orchestral score soundtrack to the colourful realms and character design, there’s plenty the two games have in common. Even when you compare specific characters in Overwatch, you can find some similarities to certain Paladins counterparts, ie. Reinhardt vs. Fernando or Torbjörn vs. Barik. Even comparing gameplay; you’ll find just as many things in common, but is that really a bad thing? If there’s one thing that Overwatch has demonstrated, fans do love team-based FPS games set on bright backdrops and not just generic warfare shooters.

Overwatch also allows players to switch between characters in between rounds whereas Paladins ties you to one champion for the duration of the match. The other major difference – Paladins is entirely free to play. Sure, you don’t have access to all the playable characters, but you can unlock them with gold earned through the course of play. They can also be unlocked with crystals, a form of currency that can be purchased with real cash to unlock characters, cards, cosmetic upgrades and more. Some premium cosmetic items can only be unlocked with crystals, but you don’t necessarily need to purchase them in order to get a complete gaming experience.

Despite all the similarities, there’s also just as many differences. For one, Paladins features a collectible card system which Overwatch does not and as such, same characters on opposing teams can be starkly different when it comes to abilities and how you play them. 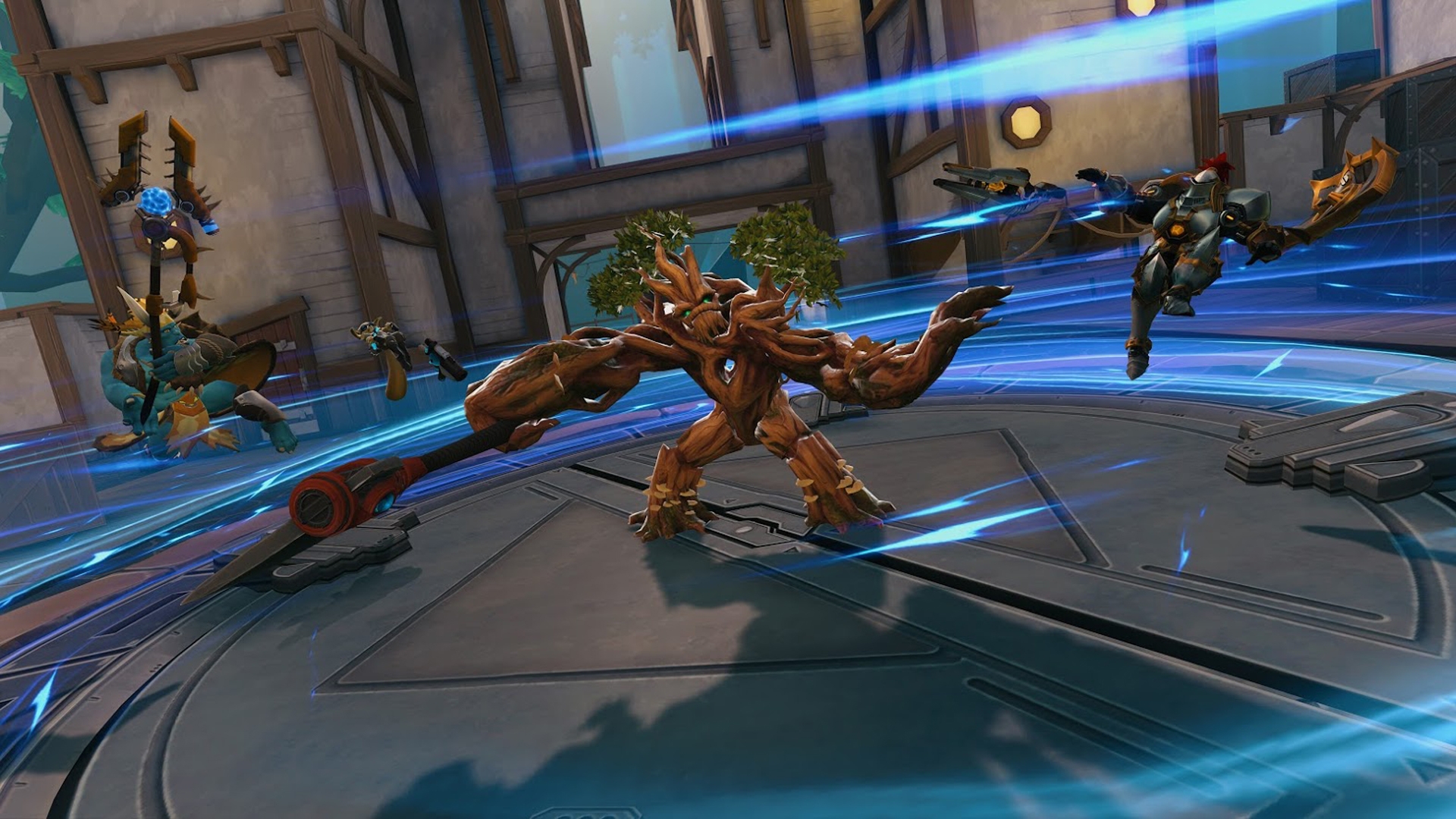 Cards provide a range of different perks, from bonuses to weapons, to additional skills and effects. Cards also come in a combination of rarities (Common, Rare, Epic and Legendary). These cards can be used to create a loadout for each character comprising of five cards. Loadouts can be customised with different rarities up to 12 points, with each rarity worth a certain number of points. This allows you to make certain cards Legendary depending on which bonus you value more in your loadout selection.

One gripe I do have about Paladins is the lack of backstory for each of the characters. It isn’t obviously clear who the Champions are or what their motivations are for working together in the Paladins realm. This might be largely due to Hi-Rez Studios other title SMITE having so much lore and rich backstory for each god released in the game, whereas Paladins just feels lacking in this department in comparison. That being said, Paladins is still in Open Beta at the moment so that could very well change in the future.

The inclusion of Mounts in Paladins feels a bit out of place. Although fun to ride on and control, these cosmetic items don’t seem to serve much purpose in their current state. Your Champion will auto mount their Mount at the start of a round, but not being able to attack on a Mount or do much else besides quick riding to a location seems like a wasted resource. 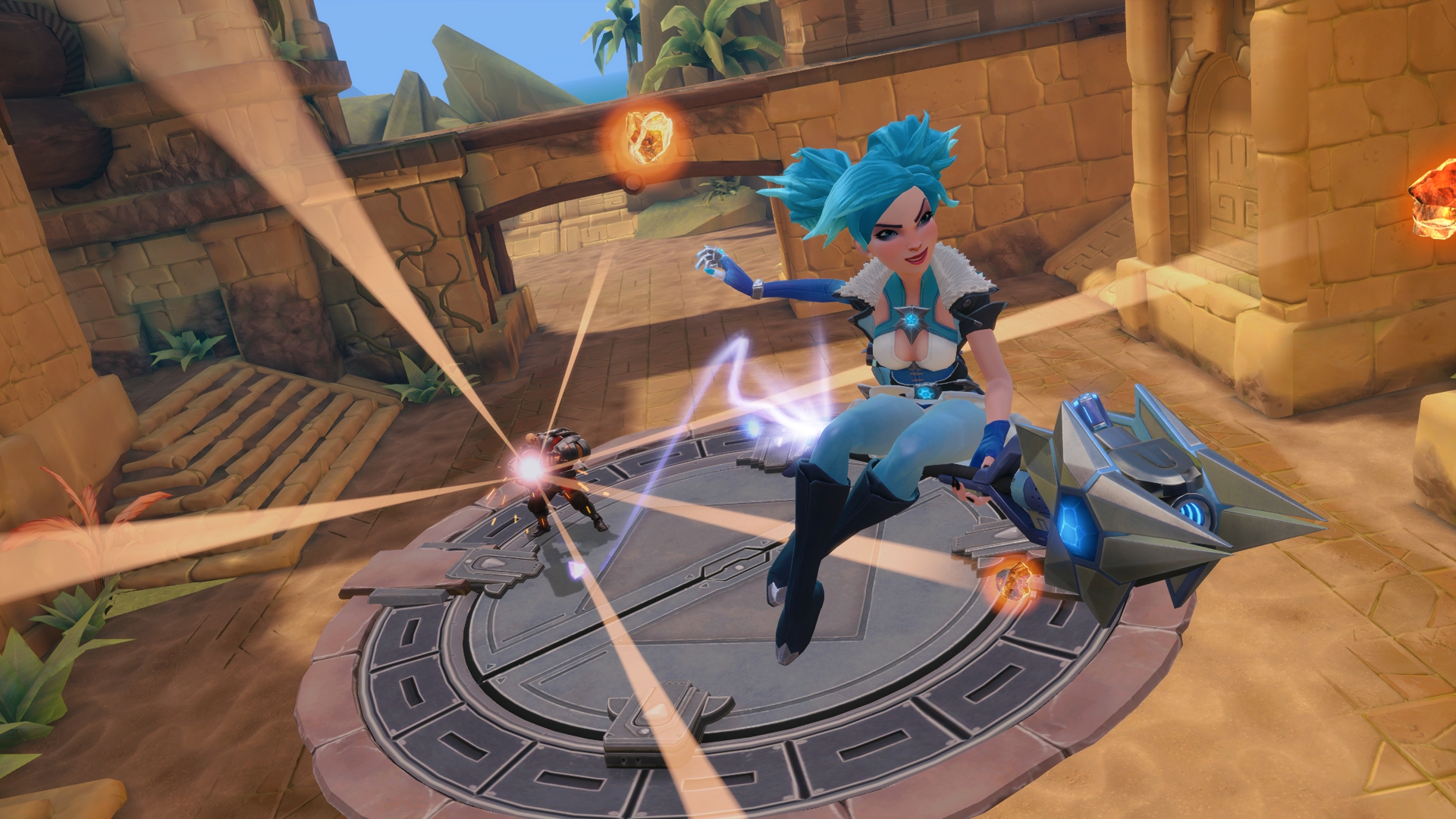 Paladins is currently in Open Beta and is free to download and play on PC or Steam right now. Hi-Rez Studios does have plans to bring Paladins to PlayStation 4 and Xbox One in the future. If you’d like to register for Closed Beta on console, you can do so at paladins.com.

At the moment, Paladins is also offering a Founder’s Pack for a flat fee of $19.99 USD which unlocks all characters (past and future), an exclusive skin for Fernando, an Infernal Warhorse mount and 20 Radiant Chests, each containing a random assortment of five cards in varying rarity. We’re currently giving away a Founder’s Pack for Paladins. If you’d like to go in the running, hit the link here. Competition closes November 20th, 2016.