What happens when the game becomes a little too real?

Developed by Red Entertainment and published by PQube, Our World Is Ended is a newly localised visual novel that’s come to both the Nintendo Switch and PlayStation 4. The game’s story follows a team of 7 game developers called Judgement 7 who find themselves caught up in a strange incident where their virtual reality project suddenly becomes all too real. As the line between the real world and game world becomes more and more blurred, it’s up to the team to work out what’s behind the strange events going on in their town.

Like a lot of visual novels, Our World Is Ended is quite a lengthy game. It should take most players around the time it takes to read through an average length adult novel to complete one playthrough. As with most visual novels though, the game features multiple paths and endings that the player can work towards, and this extends the game’s life considerably if players want to see every bit of content in the game. 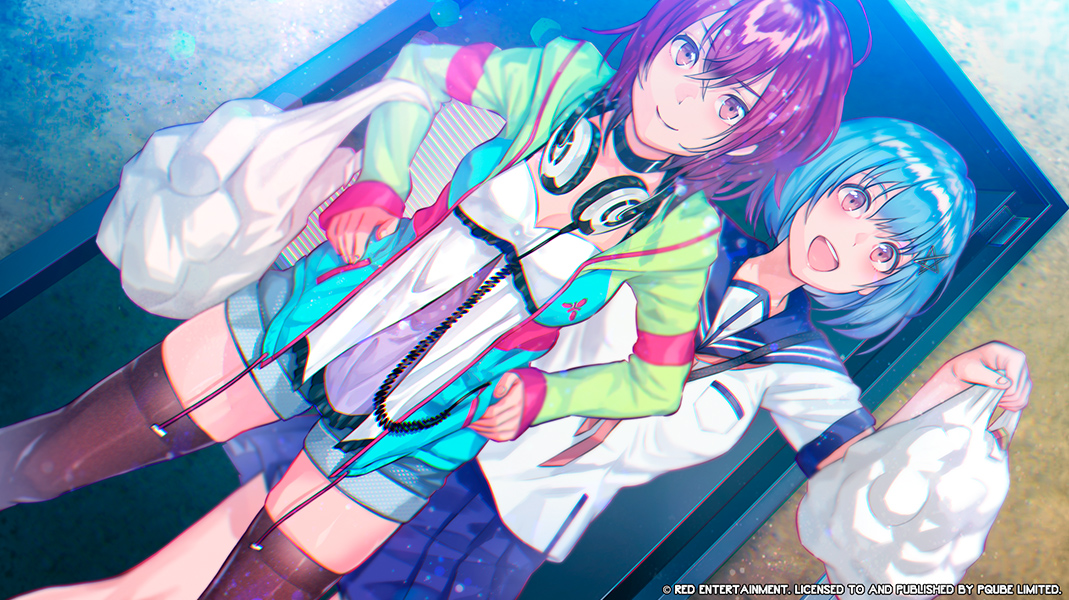 The most controversial part of the game will undoubtedly be its story. Players follow the life of the main character, Reiji, a young and fairly pervy college student. The beginning of the game in particular features many scenes involving references to the female characters’ breasts, as well as light sexual references. Some players may find this off putting, and it’s definitely a game that’s aimed mostly at males. Fortunately, although these references do continue over the course of the game, they become far more spaced out and also more tasteful over time. It’s a story that takes a little while to find its footing, partly because of this, but once it does it manages to push past the simple fan service and become a quality novel of its own. The writing quality is quite high throughout, and there’s some genuinely funny and interesting scenes. There’s a good variety of different characters, most of which have their own paths and endings. There’s a full spectrum of personalities on display, and they can cause some interesting character interactions.

The game’s pacing, however, can be a little uneven. It starts out strong, moving smoothly from the initial set up to the new crisis that the characters must face. Unfortunately, it doesn’t manage to keep it up, with the plot often getting sidetracked by the wacky antics and conversations of the characters. This continues throughout the game. Fortunately, the characters and the crazy situations they get themselves into prove to be entertaining, and they manage to keep these extra scenes just engaging enough to keep players interested. It helps that there’s also some decent character development worked in as well. It’s certainly appreciated. 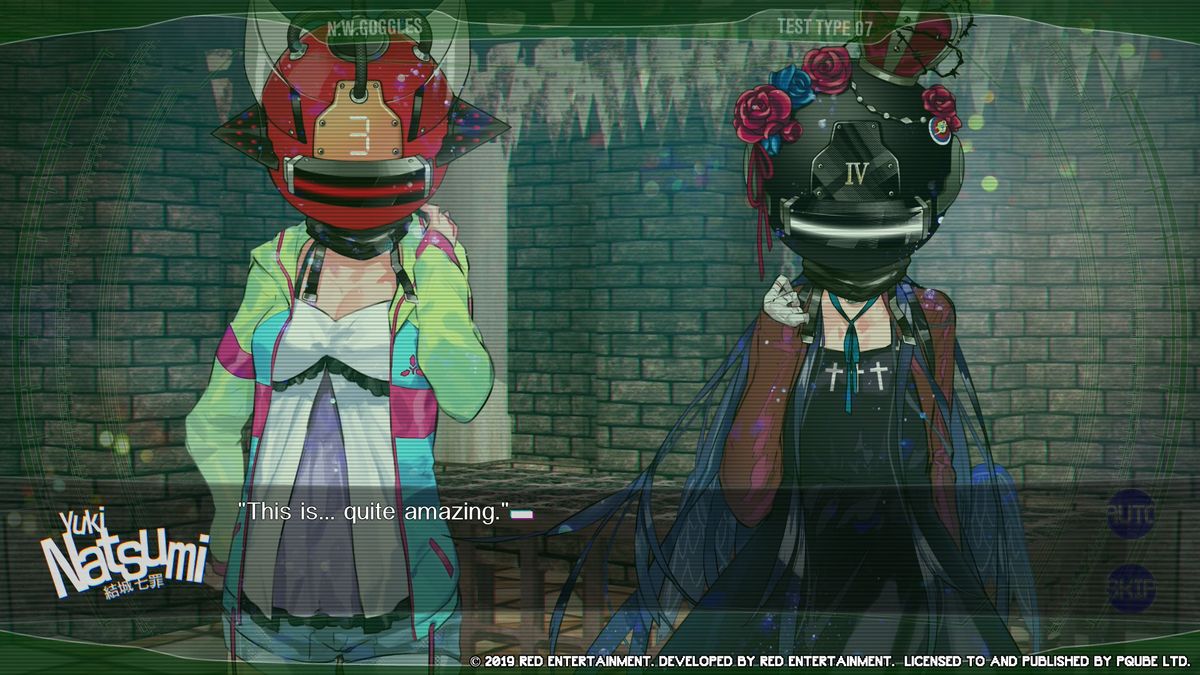 One useful feature that the game has that many visual novels lack is an affection gauge. This appears on the menu screen, and allows you to check the 3 characters that you have the most affection points with. Affection points are something that visual novels usually tally up in the background, never being shown to the player. Players usually only see the influence that they have on the game. Since affection points determine which ending you get, as well as which path you go down, this is a really handy thing to be able to check.

Visually, Our World Is Ended doesn’t disappoint. The artwork is all stylish, detailed and colourful. It’s quite a vibrant game, and it makes for a pleasant visual experience over the course of the game’s many hours. The music is also high quality and fitting of the game’s themes, with a reasonable number of background tracks that are catchy, yet not too repetitive. The Japanese voice acting is top notch, with almost every character voiced by high profile, veteran actors. They all do a great job of bringing the game’s dialogue to life, and there’s some memorable, fun scenes where you can tell that they were really giving it their all. 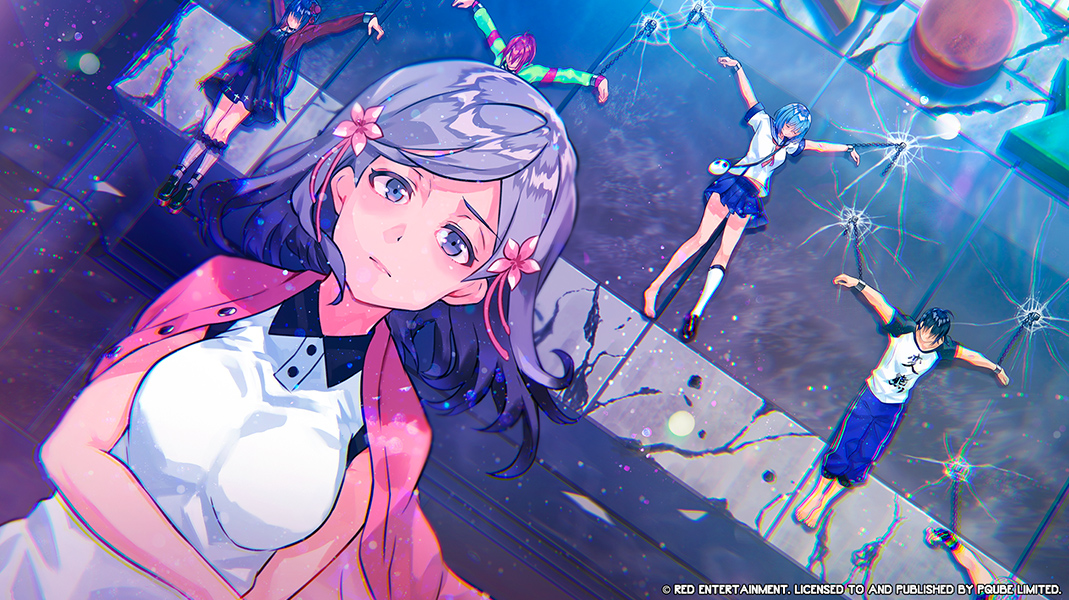 Although I wasn’t quite sure about Our World Is Ended at first, the game really grew on me over time. Despite some slightly uncomfortable, pervy scenes at the start, the game’s interesting mystery story, enjoyable writing, engaging cast of characters and high quality production combine to create an enjoyable visual novel. There are a surprising number of typos and missing words in some places though, which does take away from the overall quality slightly. That said, Our World Is Ended is recommended for any gamers who are looking for a quality visual novel, featuring a detailed story with a healthy amount of meat to it. If you give it a chance, then you’ll likely be pleasantly surprised by what you find.

Our World Is Ended is now available on the Nintendo Switch and PlayStation 4 in Europe and Australia. It will be released in the U.S on the 28th of May.