If there’s one thing that remains a constant over the last few years in the gaming industry, it’s 2K’s ability to expand on the NBA 2K franchise. Of course there’s been a few missteps over the years, and when you’re sitting pretty at the pinnacle of basketball simulation, it would be easy for 2K Sports to rest on their laurels and churn out another clone with a new year stamped on the cover art. Surprisingly, Visual Concepts have dug a little deeper with NBA 2K18 to further build on the franchise while addressing some glaring issues from last year’s iteration. 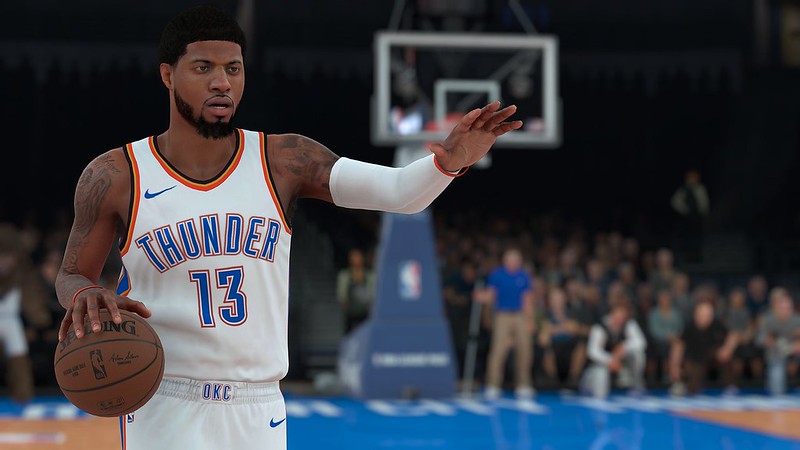 The biggest selling pitch this year is the all new open-world “Neighborhood” mode. The mode is akin to Grand Theft Auto Online, which isn’t that surprising of an inclusion when you consider Take Two owns both 2K Sports and Rockstar Games. The Neighborhood mode serves as a social hub for MyPlayer activities, bridging together MyCAREER, MyPARK and the Pro-Am circuit into one immersive basketball environment.

The biggest selling pitch this year is the all new open-world “Neighborhood” mode.

There are shops and venues to explore as other MyPlayer avatars run around you. There’s little reason for interaction though, asides from playing casual games of ball or mini-games. You can effectively go about your business without ever engaging anyone and still not miss a beat. What I did come to realise after a while is the Neighborhood isn’t quite as glamorous as first impressions. It’s nothing more than an interactive menu system which some will love, others not so much.

MyCAREER story arc is largely the same, following a rookie who rises beyond adversity to hopefully become an NBA superstar with your guidance. Taking the role of DJ, a former street baller, the story can feel a bit cliché, drawing inspiration from NBA calibre players who have walked a similar path from tough beginnings to NBA stardom. Yeah I totally get it, but it doesn’t make it any less cringe-worthy and humorous when your crappy agent… is pretty much crap. This is one aspect of MyCAREER that repeats itself year on year, but it does play better than Spike Lee’s interpretation in NBA 2K16. 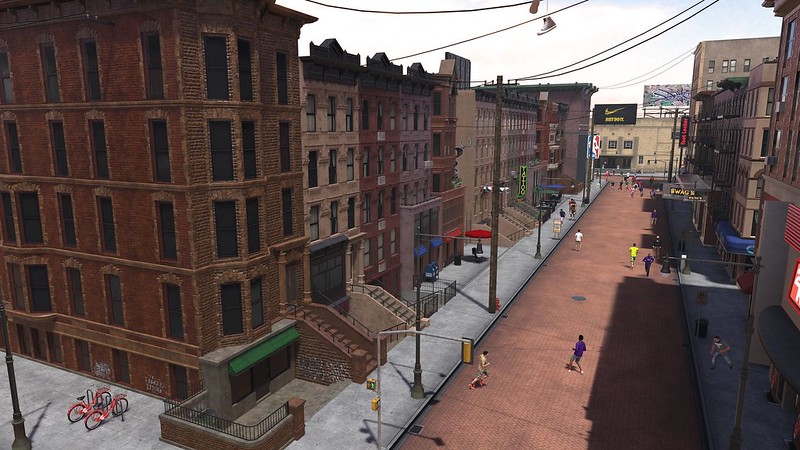 My love affair with MyTEAM continues for another year, building dream teams from virtual trading cards of all your favourite past and present all-stars. Collecting all the greats doesn’t come cheap as purchasing packs and boxes cost a fair deal of VC. Two new game modes have also been introduced in NBA 2K18, Super Max and Pack & Playoffs. Super Max mode adds salary caps and season gameplay for online competitive play, while Pack and Playoffs is a pack draft style mode where you can build teams on the fly.

All-Time Teams for all 30 teams featuring the greatest players of all time have been added for you to compete against in Play Now, or take on all the teams in MyTEAM’s All-Time Domination mode to test your ability. In total, there are 62 classic teams featured, 17 of which are new to NBA 2K18. Pit MJ’s Bulls against the likes of the current champs to see who emerges on top.

My love affair with MyTEAM continues for another year, building dream teams from virtual trading cards of all your favourite past and present all-stars.

Visuals continue to be a standout in NBA 2K18 as players look closer to their real life counterparts than ever before. I didn’t think it would be possible for the game to look any better but somehow Visual Concepts always finds a way to draw out more realism at an almost overly obsessive level. Beards are a standout, as are the inclusion of new shoes from well-known Nikes and Jordan, through to lesser known brands such as Li-Ning and Big Baller Brand. 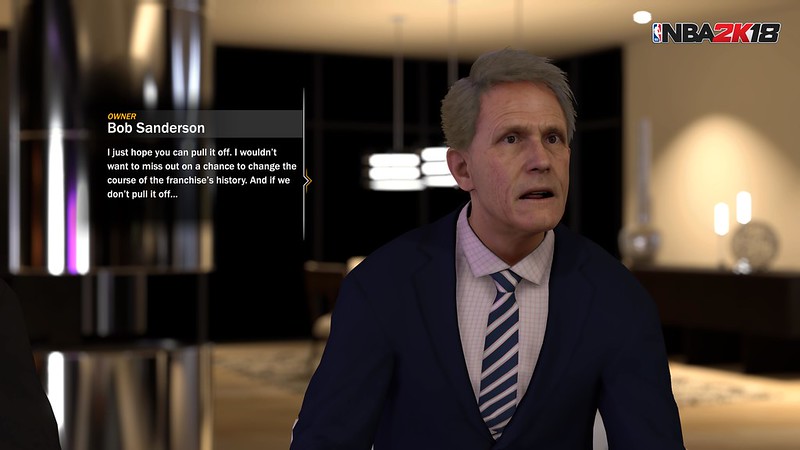 MyGM injects a story line into the mode, which actually isn’t too bad as it provides a backstory and motivation for your MyPlayer creation for becoming a General Manager. All the fun of dealing with internal politics of franchise management and ownership demands make a return. For some, there’s nothing better than dealing with the press and managerial duties, but for me personally I prefer to spend my down time playing actual b-ball.

One major gripe many had with NBA 2K17 was the heavy animation during gameplay, sometimes taking complete control of your freedom to direct the action as animations played out. Visual Concepts have addressed this situation by revising the motion system so that dribbling and off the ball motion is no longer driven by animation. What you’re left with is a more free-flowing movement where the player has greater control of their character. At first, I honestly didn’t notice much of a difference but after playing a few games, the pace and freedom is there. If anything, NBA 2K17 may have taken things a little too far in the animation stakes as NBA 2K18 attempts to reel it back into control.

I didn’t think it would be possible for the game to look any better but somehow Visual Concepts always finds a way to draw out more realism at an almost overly obsessive level.

Micro transaction with VC (Virtual Currency) has been a staple in the NBA 2K for quite some time now, whether you like it or not. Spending real world cash is still the simplest means of advancing your MyPlayer quickly, however if you’re prepared to grind away over the course of the year, it’s still very easy to accumulate VC through Domination games in MyTeam, or linking your smart device with MyNBA2K18 for daily login bonus VC. The companion app is pretty much the same as last year, except for the lack of an auction house at this stage. I do appreciate the ability to scan your face via the app, or you can customise your MyPlayer with sliders and new options to better capture your own personal taste and style. 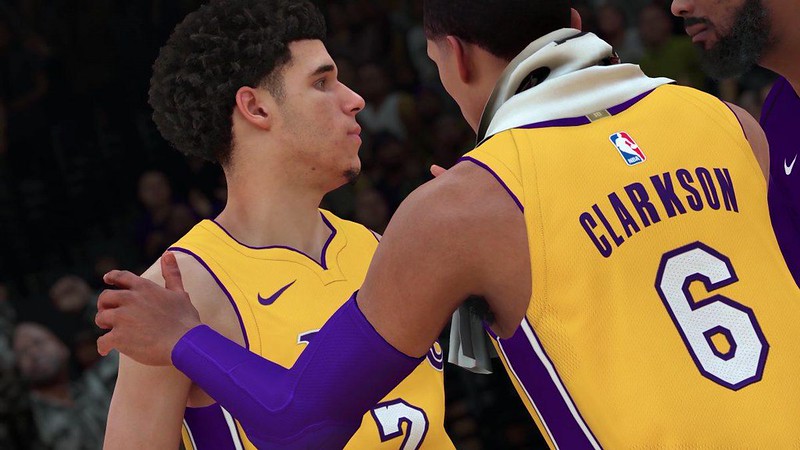 When you consider that one of the biggest issues in NBA 2K18 was the cover athlete changing teams just prior to release, NBA 2K18 is a solid entry for another year. The gameplay improvements are welcome, particularly the visual representation of a shot meter. The previous game modes haven’t been removed in place of introducing new features, with Visual Concepts building upon their solid foundation rather than tear and tweak at it. Virtual Currency is still a concern, but let’s be honest here; you’re going to be playing this game for another year regardless. One last point, having the outspoken Lavar Ball harass you with text messages if you don’t meet his high expectations is classic. Bravo, 2K Sports!

When you consider that one of the biggest issues in NBA 2K18 was the cover athlete changing teams just prior to release, NBA 2K18 is a solid entry for another year.