Marvel’s Guardians of the Galaxy: The Telltale Series – Episode 1 Review

By this point, most gamers are probably familiar with Telltale Games. They have no shortage of successful games, many of which are based on popular licenses like The Walking Dead, Batman, and Game of Thrones. This is their first time tackling a Marvel property, and it’s certainly a timely choice one, considering that the second Guardians movie has just been released in cinemas. Like their previous games, this is an episodic title, with 5 episodes planned for release during 2017. So, what’s happening in Telltale’s version of the Guardians universe? Time to find out. 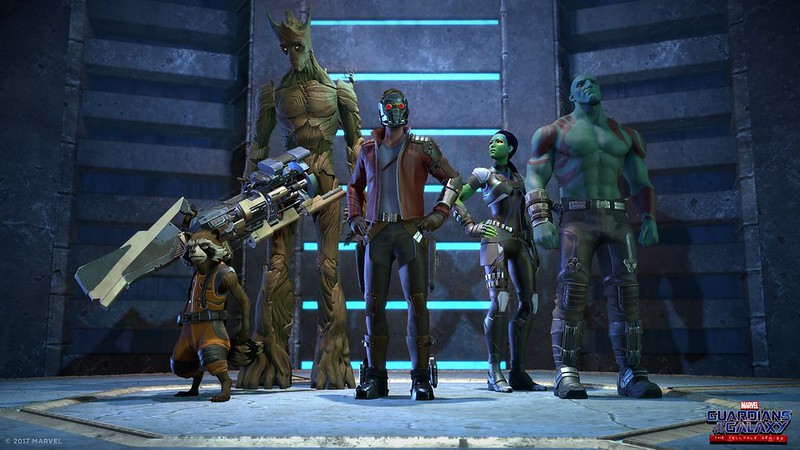 The story begins with the Guardians gang getting a call from the Nova Corps, who are struggling to fight Thanos. One thing leads to another, and their ship ends up crashing onto the planet that Thanos is currently assaulting. There’s not a lot of introduction to the characters provided, so people who haven’t seen the movies or comics may feel a little lost at first. Some of the blanks do get filled in through the character interactions though, and you start to get a good feel for the group’s personalities. Telltale have done a good job of keeping the gang true to the personalities we know and love from their previous appearances, and seeing them throw down against Thanos is one of the highlights of the game.

The game’s pace is all over the place, with some scenes playing out with a very quick pace, like a semi-interactive movie. Others are much slower, representing a more typical point and click adventure game where you have to carefully explore an area and find key items to progress the story. The strong contrast between these two types of scenes can be somewhat jarring. It would have been nice to see the game adopt a more balanced pace to keep things flowing more smoothly. Shortening or even just simplifying the point and click sections could really help to keep players engaged. 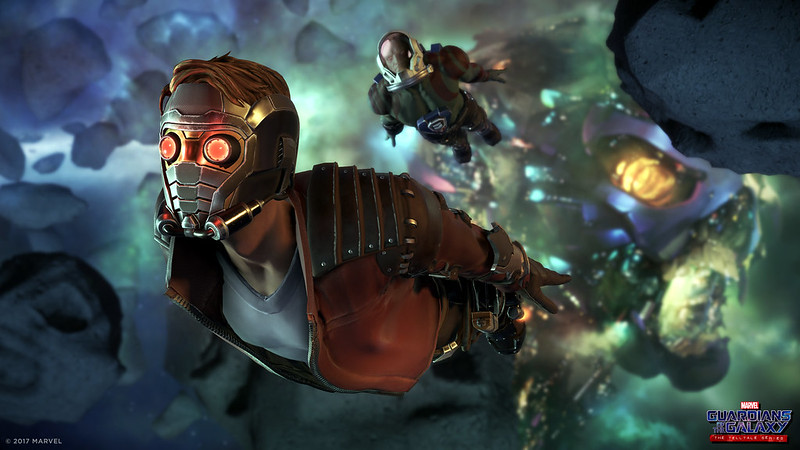 As usual for a Telltale game, you can’t make everyone happy. The gang always ends up at each others’ throats, with the player’s choices determining who is mad at who. For example, Rocket gets mad after you tell him off for being mean to Drax. If you then go along with one of Rocket’s crazy schemes to cheer him up, this pisses off Gamora. Then you might choose her to go on a mission, which makes other characters feel left out, and the cycle continues. There’s a good flow to the dialogue, but none of the lines are particularly memorable. It’s far from Telltale’s worst effort writing wise, but it lacks the kind of impact and wit that we’ve seen from the movies.

Visually, the game is passable, with the character designs seemingly being based closely on their comic counterparts. The character’s outlines and colours are softer than we’ve seen in games like The Wolf Among Us, giving the graphics a fairly cartoony vibe. The voice acting is a bit of a mixed bag, with some characters having stronger performances than others. Star Lord and Rocket’s actors did a good job, and actually mirror their movie counterparts fairly well, but the rest of the cast felt a bit weak and flat in their delivery. There’s a couple of technical issues thrown into the mix as well, with noticeable pauses between scenes as the game loads the next event. There’s also a few pieces of dialogue which cut off abruptly, which makes it feel like they were either played out of order or simply not timed correctly. 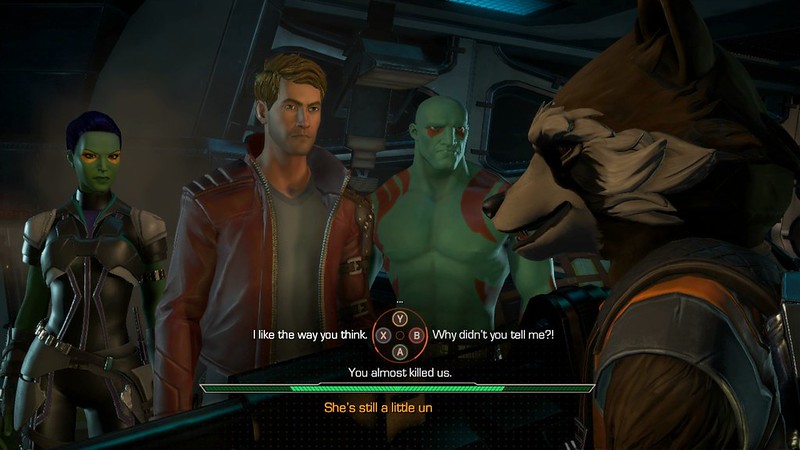 In conclusion, the first episode of Telltale’s Guardians of the Galaxy game is a mixed bag. On the positive side, they’ve captured the essence of the characters well, and managed to tell a story that will definitely surprise some players. The action sequences are played out well, and there’s a reasonable amount of content for your money. Unfortunately, this is somewhat balanced out by some technical issues, mixed quality of voice acting, and the uneven pacing caused by clunky point and click sections. There’s definitely some room for the game to grow as it continues though, so it’ll be interesting to see how the rest of the episodes play out and expand the overall story from here.

Marvel’s Guardians of the Galaxy: The Telltale Series - Episode 1

TThe first episode of Telltale's Guardians of the Galaxy game is a mixed bag. On the positive side, they've captured the essence of the characters well, and managed to tell a story that will definitely surprise some players.