There's more than meets the eye at this academy.

Kotodama: The 7 Mysteries of Fujisawa is a brand new PlayStation 4 and Nintendo Switch visual novel brought to us by PQube, but this one is a bit special. This is the first game to be both developed and published by PQube, and they’ve enlisted the help of Japanese company Art Co. Ltd to create their very own game. The results are certainly interesting.

The game’s story begins with your character transferring into Fujisawa Academy. Before you can even get to your first class, you bump into one of your classmates, Nanami. She’s a member of the school’s Occult Research Club, and before you know it, you’ve been pulled right into their activities. Nanami and Wakaba, the president of the club, are both passionate about investigating anything weird that’s been going on around the school. Their current obsession is their research into the 7 Mysteries of Fujisawa, a bunch of rumours about strange phenomena taking place at the Academy. There’s a missing principal, sightings of a white wolf, word of a strange gentleman walking around the campus at night, and more. Nanami appears to have an unusually strong interest in one mystery in particular, the Curse of Mikoto, but it’s not clear why… It’s up to the club, and by extension you, to figure out the truth of what’s really going on. Fortunately for you, you happen to have made a contract with a small fox-like demon. The benefit of this contract is that you now have the power to see through the lies of others, and then force them to briefly speak the truth. 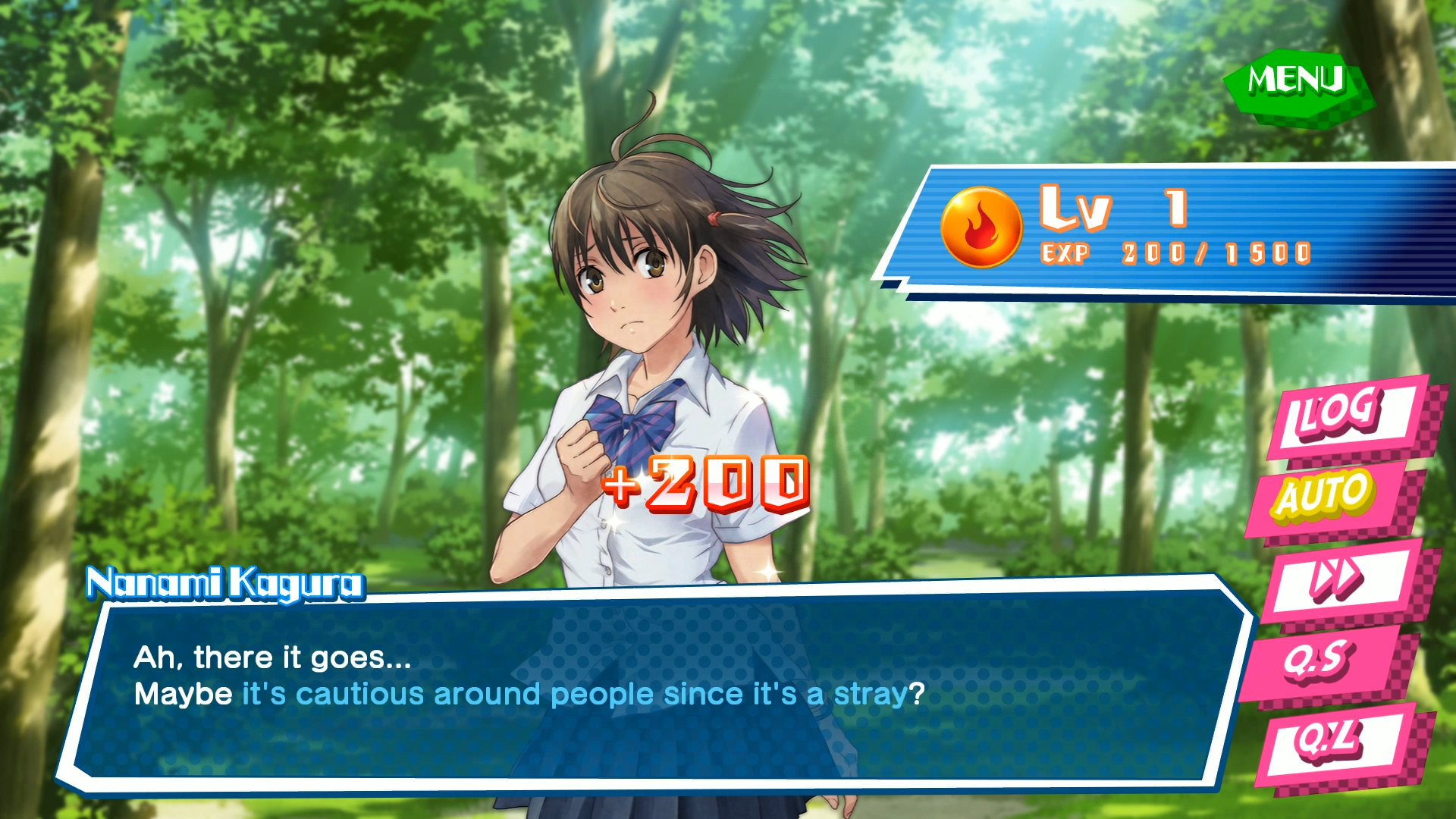 Kotodama’s gameplay is split up into two distinct segments. Most of the game plays out like a typical visual novel, with players reading through the story and making choices at certain times in order to steer the direction of the events. The game offers players a large number of save slots, and they’ll definitely want to make use of them because the choices in this game (even some of the seemingly small ones) really make a big difference. Kotodama offers the usual visual novel features, such as an auto mode and the ability to make a quick save, but importantly it also allows players to rapidly skip through the text, which is much appreciated and really comes in handy in this game.

The other segment is rather unconventional, and will be the one that this game will be remembered for. What really sets Kotodama apart from other visual novels is its match 3 puzzle gameplay. As it turns out, there are multiple people at the Academy who are hiding things, and this is where your power comes into play. When you reach certain important parts of the story, you find people hiding the truth, and there’s only one way to get to the bottom of things. You need to use your power to strip away your opponent’s lies, which your character chooses to visualise as stripping away the person’s clothes. It makes a strange kind of sense. 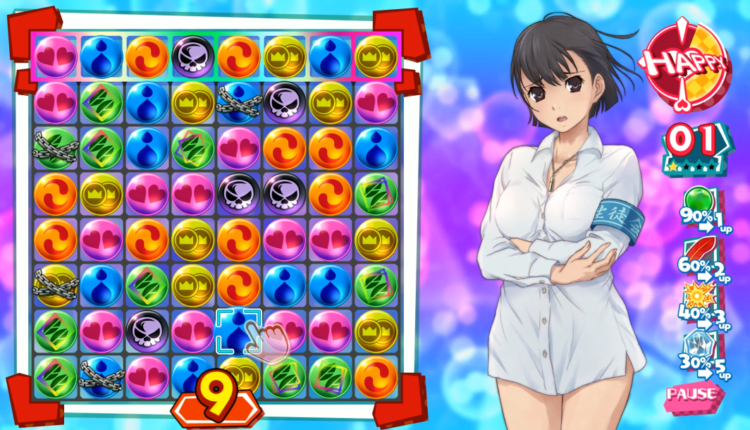 After your character uses their power, the visual novel is suddenly replaced with a screen full of colourful orbs, with each different colour representing an element. There’s an area on the right hand side which shows the character that you’re currently trying to get the truth out of, as well as a Happy gauge. Making matches fills the Happy gauge over time, and whenever you fill a section of it, you strip away a layer of the character’s clothing. This is naturally where the game’s fan service comes in, and it’s not long before you have various female characters standing before you wearing little more than their lingerie. This all happens in your character’s imagination though, in reality the characters remain fully clothed and are unaware that the power has been used on them. There’s also one male character that you get to strip, which adds some needed and appreciated gender equality, but overall the fan service is mostly going to appeal to male players.

Each character is weak to a particular element, so taking advantage of that with careful matches of the orbs can speed the process up. After selecting an orb, it moves to the top of the screen where it can match with other orbs, while orbs that were above its previous position now move down a space. The more orbs you match in one go, the better, with large matches rewarding you with power ups that have useful effects like freezing the move counter and removing all orbs of a random colour. The main challenge of this mode is that you only have a limited number of moves in which to fill the character’s Happy gauge. If you run out of moves, then it’s game over and you’re sent right back to the title screen, so it’s wise to save frequently just in case. There’s not a whole lot of depth to the puzzle gameplay, but it’s just engaging enough, and serves as a welcome break from all the reading. 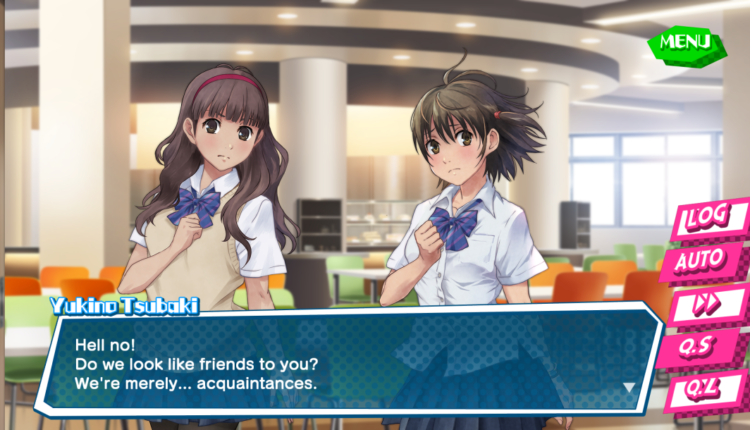 The game features three different endings, although the first is mandatory. Getting the other two, especially the true end, requires you to really pay attention and make all the right choices over the course of a playthrough. Without spoiling anything, seeing the whole story requires the player to run through the story multiple times as part of the overall plot. It’s an interesting way to tell the game’s story, but simultaneously serves as both the game’s biggest strength and weakness. Although there’s some new scenes added each time, each run through the game requires you to skip through a large amount of story that you’ve already seen before you get to make more progress. It’s fortunate that the game’s skip mode is quite fast, and each run only takes an hour or two. Thee puzzle game cannot be skipped however, and with the multiple required runs, it can become a little repetitive. Fortunately, the story wraps up before the repeated puzzles can really start to grate.

Kotodama is a solid first game development effort from PQube overall. The game features gorgeous artwork that really brings the characters and environments to life, a detailed story, and some simple yet entertaining puzzle gameplay. Although the story is detailed and engaging, the way it’s told is a little too repetitive, and some players may find the ending to be slightly unsatisfying. The game loses a point there, but that doesn’t stop the game from being a high quality visual novel, and one of the more unique ones to come along in recent times. With more and more visual novels appearing on the market each year, it’s not easy to stand out. Kotodama manages to do this, and it’s definitely worth a look for fans of the genre.