The dawning of a new world.

Horizon: Zero Dawn has been five years in the making, and is a far cry from what you may have grown accustomed to coming from developer Guerrilla Games. Famed for developing the Killzone series, Horizon: Zero Dawn is a stark departure from their comfort zone. It’s a high risk project into an unknown world which may very well be their best work to date. 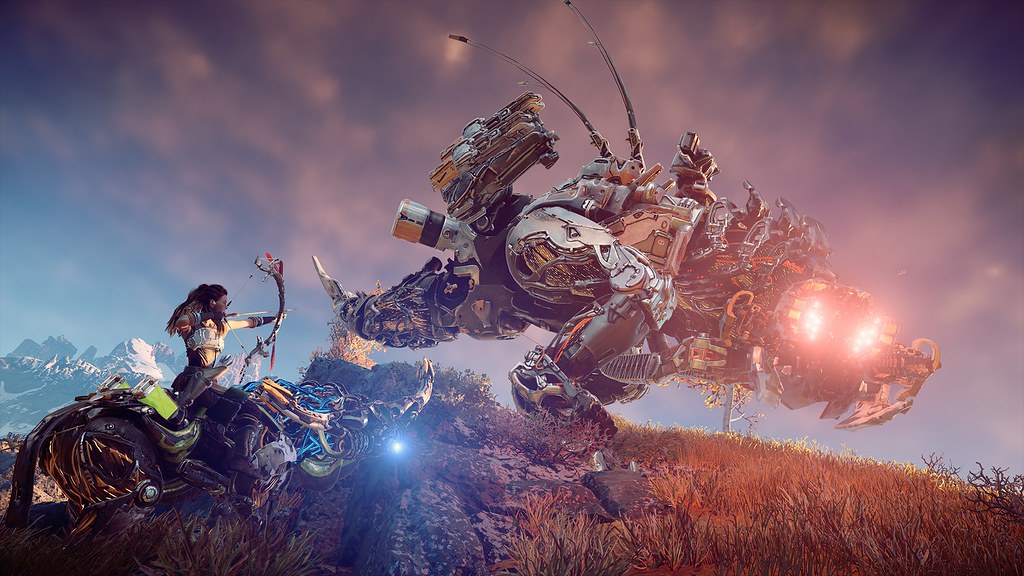 Humankind has been pushed back to the caves and mountains, living off the land in tribes, surviving on hunting and scavenging alone. It’s a Gen Y’s personal hell.

Set in a far distant future, humans are no longer the dominant inhabitants of Earth as gigantic, mechanized creatures known only as the “Machines” now sit atop of the predatory ladder. Nature has reclaimed the land, as plants and wildlife overrun long forgotten cities created by the ‘old ones’, a fallen civilization lost during the collapse of man. Humankind has been pushed back to the caves and mountains, living off the land in tribes, surviving on hunting and scavenging alone. It’s a Gen Y’s personal hell.

Playing as Aloy, an outcast huntress with a penchant for archery, you’ll be setting off on a journey to uncover the mystery behind the creation of the Machines and the cause of mankind’s downfall. But there’s also a deeper, more personal quest for Aloy to unravel – the whereabouts of her mother and her own origin. Right from the very beginning, those lingering questions are seared into your psyche, much like pondering the meaning of one’s own existence.

Quick with her tongue as she is with her bow, Aloy is filled to the medicinal pouch with personality and quick-wit, spurting sarcastic jibes that often go over the head of supporting characters. You do have some control over Aloy’s responses, purely for flavoured dialogue which has little impact on the main narrative. 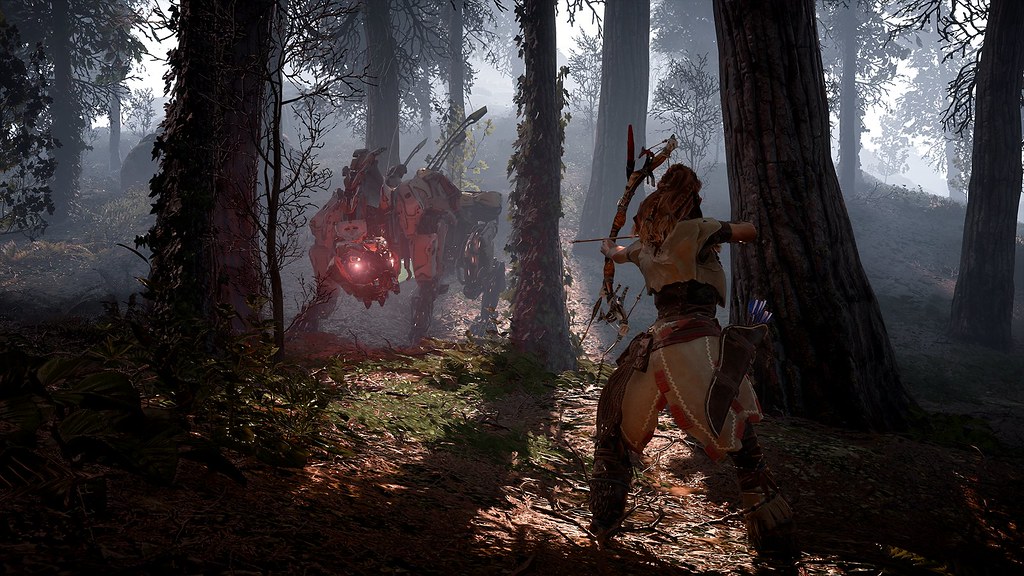 Horizon gameplay is raw and gritty, devoid of futuristic laser beam weapons of so many shooters on the market today. Armed with only her “primitive” bow as her primary weapon and a hand full of tactical tools and manoeuvres at her disposal, you’ll need to familiarise yourself with the tools of the hunt in order to survive. Barrel-rolling is perfect for creating some distance between yourself and a mammoth target; or evading an incoming projectile, while tools like the Tripcaster can be deployed to momentarily stun your target. The Ropecaster is a handy accessory for immobilising Machines, while the Spear is best used for quick melee strikes and final hit takedowns. Weapons can also be combined with elemental damage to exploit machine weak points for that upper edge.

Figuring out how to topple a giant is deeply satisfying, particularly after you’ve been trampled on again and again by a Thunderjaw goliath.

Early on Aloy discover an artefact from the ‘old ones’ allowing her to focus, momentarily seeing the world in a different light as she scans for an enemy’s weaknesses, detect walking paths, track creatures, or learn some of the world’s lore. Aloy’s Concentration skill helps to slows down time for a steady dead shot aim, which is needed when confronted with more creatures than you can handle. When to make use of your abilities is situational, rendering some equipment useless against some of the trickier beasts.

Ammunition and health reagents are craftable through a neat creation wheel-type menu system by collecting appropriate materials found in the wild, or salvaged from defeated machines. This adds an element of survival to Horizon, as I found myself at times running out of arrows, tip-toeing through tall grass to avoid detection until I could gather enough materials to craft again. 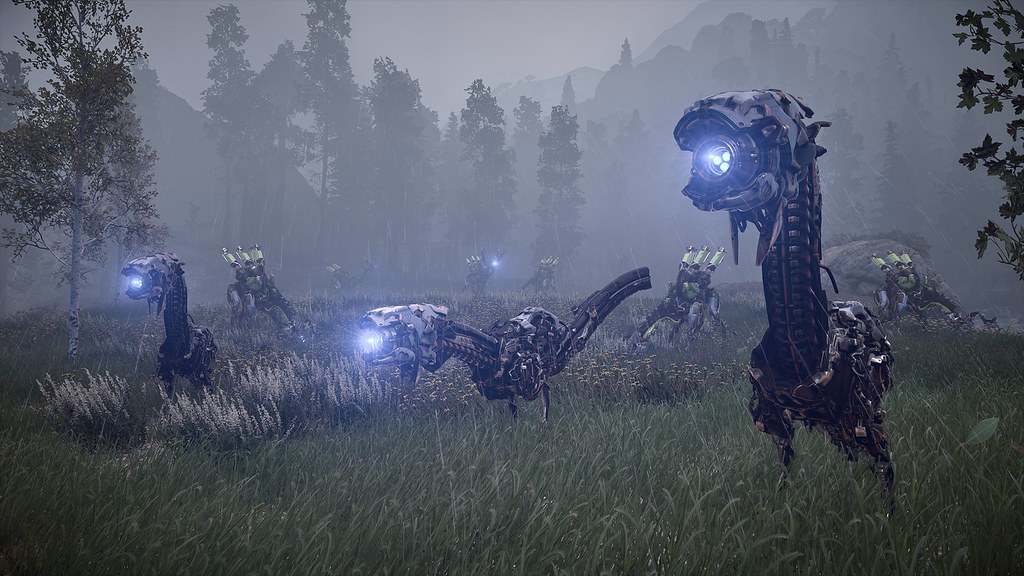 Guerrilla Games deliberately excludes a tutorial system on how to take down the different species of machines, encouraging players to figure out how best to tackle each beast through trial and error. Figuring out how to topple a giant is deeply satisfying, particularly after you’ve been trampled on again and again by a Thunderjaw goliath. The world feels particularly wild as machines will hunt you down at every opportunity they get. Even simple ‘fetch’ quests can turn into a ferocious battle when you inadvertently draw more and more beasts into an encounter due to your own carelessness. Sometimes employing stealth tactics and treading undetected is the best line of defence.

The different tribes that inhabit the world provide genuinely interesting insight, each with their own philosophy and ideology. Elders spin tales for the younger generation, sharing beliefs that mirror much of our own world’s thinking and ideology. Having Aloy bounce between the different tribal camps to hear their thoughts, while venturing into the deep underbelly of the world to uncover the truth is both a polarizing and provocative way to ingest the rich narrative in healthy doses.

Animation and cut scenes are particularly mesmerising, as the sun glistens off rendered faces and particles of sunlight cast shadows over the evergreen plains.

Coming in at approximately 35 hours of gameplay for the main campaign and the odd side quest, time quickly melts away in the Machine infested open-world, thanks in large to artful storytelling with themes that will leave an imprint well after you’ve stepped away from the screen. Side quests at its core is nothing revolutionary, however there is a good assortment of extra activities to do, from learning more about the past to unlocking more of the world map, each offering XP and random loot as incentive to take a break off the beaten track every once in a while. 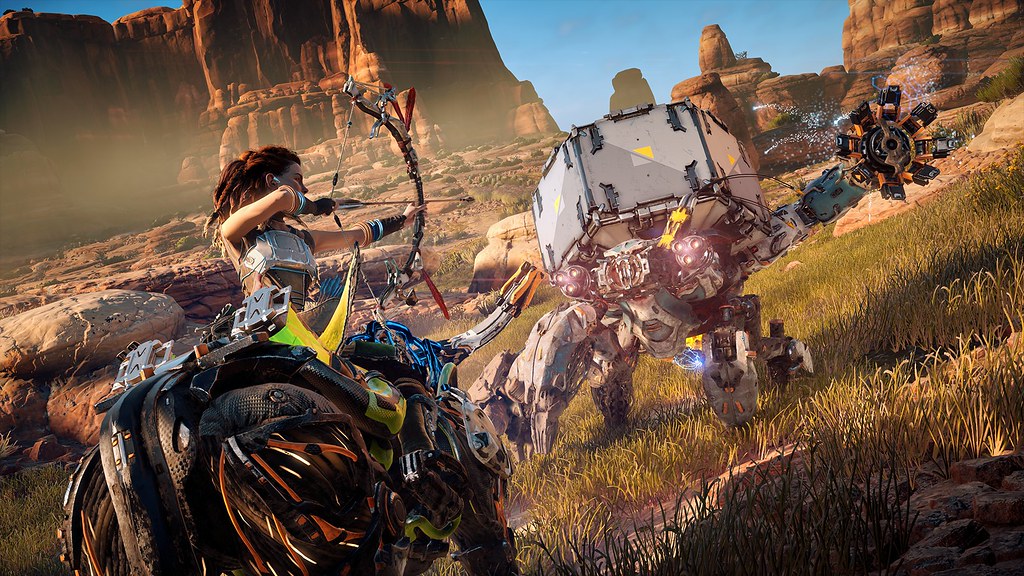 Horizon: Zero Dawn is powered by Decima, Guerrilla Games’ proprietary game engine and damn, does the graphics look amazing. First introduced in Killzone: Shadow Fall, Decima has been re-engineered to incorporate 4K gameplay and HDR recording, going hand-in-hand with the PS4 Pro, although frame rate is capped at 30 frames per second even on a PlayStation 4 Pro console. Even running on a standard PS4 is nothing to scoff at. Gameplay is crisp, physic logic is logical, and rendering is nice and clean. Animation and cut scenes are particularly mesmerising, as the sun glistens off rendered faces and particles of sunlight cast shadows over the evergreen plains. Top notch voice acting for Aloy by Ashly Burch (Borderlands 2) rounds out a very neat package. It isn’t all perfect, but Horizon doesn’t do too much wrong.

There’s not much to fault in Horizon: Zero Dawn. Aloy is one of the most intriguing female protagonist in years, the gameplay is a fine balance between vulnerability and unnatural power, and the environments, visuals and textures are a delectable feast for the eyes. Horizon: Zero Dawn sets the bar for games to come this year, putting a big hand up for the Game of the Year mantle. Horizon: Zero Dawn is a must-play experience for 2017. 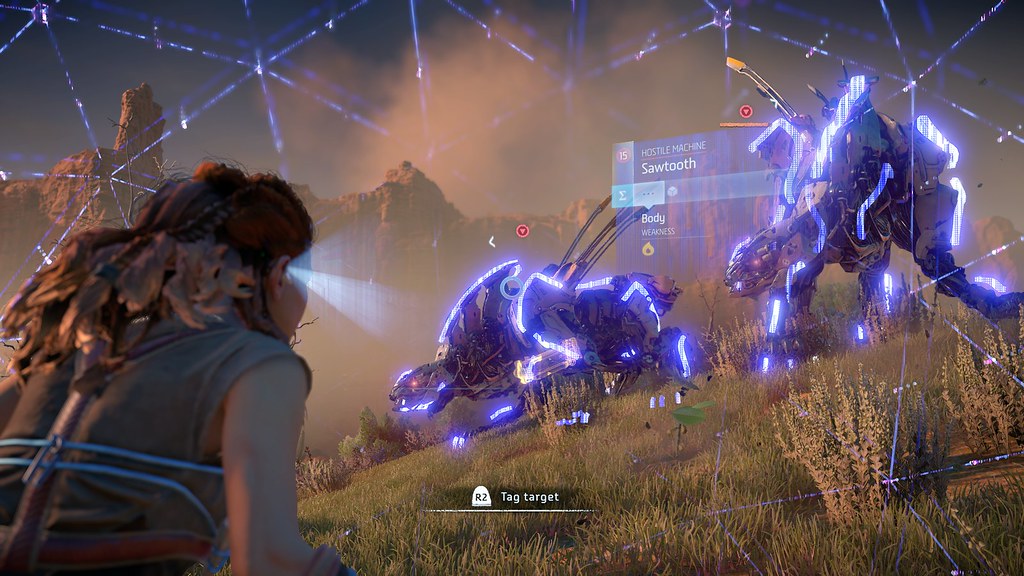 There's not much to fault in Horizon: Zero Dawn. Aloy is one of the most intriguing female protagonist in years, the gameplay is a fine balance between vulnerability and unnatural power, and the environments, visuals and textures are a delectable feast for the eyes.