Here’s something for Sega fans with First 4 Figures now taking pre-orders on an all-new exclusive Ryo Hazuki statue from the Shenmue series.

There hasn’t been a new Shenmue title since Shenmue II was released on Dreamcast back in 2001, yet the legacy of Shenmue continues with a cult-like following for the series. Perhaps this new line of statues could point to a new title in the future…. we can always dream.

Anyway, back on topic. First 4 Figures will be selling two variants of the Ryo Hazuki sculpt. Designed to be a 1/6 scale and standing at 12 inches tall (approx. 30cm), Ryo is dressed in his trademark brown jacket and light blue jeans, ready for a fight in his battle pose. 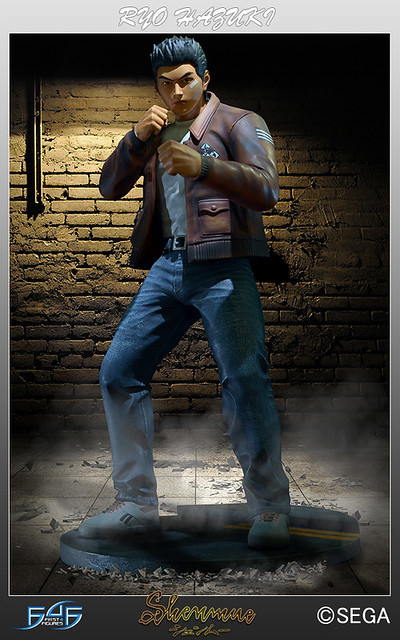 Ryo comes with a base designed around the streets of Yokosuka where the Shenmue adventure took place. Only 750 of these will be produced worldwide with each piece individually numbered. Ryo is priced at $169.99 USD with an expected release in Q4 of 2013.

As with many collectibles from First 4 Figures, a variant statue is also available in even more limited quantities. A special release of Ryo standing atop of the legendary Phoenix Mirror will also be produced, however only 350 of these will be made, each piece also numbered. First 4 Figures have noted that the earlier pre-orders will get the lower numbered piece so order early if this matters to you.