Evolution of the FPS genre?

Evolve is here and its shaking up the conventional multi-player formula with its unique take on co-operative first person shooting. Its asymmetrical design is deliberate and well-crafted, although it has its fair share of difficulties along the way. 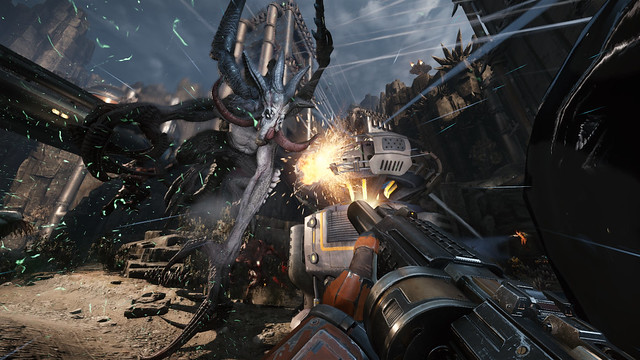 It’s been a fairly long wait between releases for fans of Turtle Rock Studio. After the blistering success of Left 4 Dead (2008) followed by a brief association with now-defunct publisher THQ, Turtle Rock eventually settled down with 2K Games on publishing duties for Evolve. With such a hefty lead-in period between major titles, Evolve has had plenty of time to be polished up and it certainly shows.

The concept behind Evolve is simple enough – band together as a team of four Hunters in order to kill a mammoth-sized Monster controlled by a fifth player. Your objective is to exterminate the Monster before it can exterminate your team or achieve its secondary goal, such as destroying a pre-defined target like a power plant. On the flip-side, a single player is tasked with decimating the opposing team as a lone powerhouse juggernaut.

Although it may appear 4 versus 1 is unfairly stacked in the Hunters favour, the Monster does have the ability to evolve (hence the name), tipping the power balance right back into a single player’s hands. Evolving requires feasting on the local wildlife and a metamorphosis cacoon phase, leaving the Monster vulnerable to attacks. This creates some very tense and frantic gameplay moments best experienced with friends and other players. 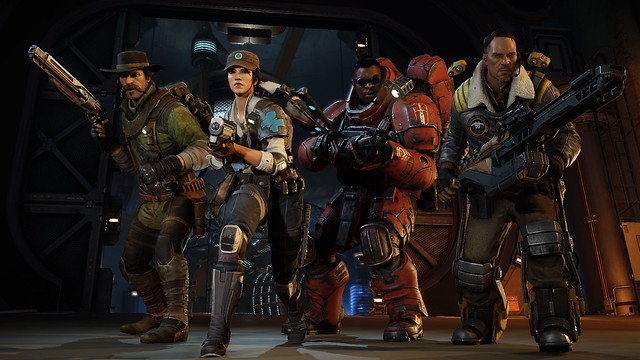 On face value, Evolve does appear somewhat sparse with only four Hunter classes available each game, each one being unique and mandatory to your wild hunt expedition. The Trapper, Support, Medic, and Assault classes each come with their own unique set of skills to battle one of three available Monsters (Goliath, Kraken and Wraith).

One of the toughest aspects of an asymmetrical design approach is balancing the sides evenly so one team (or player) isn’t unfairly overpowered against the other. From the most part, Evolve does a commendable job with the power struggle; with no one team having an outright advantage early on. Depending on how adept you are with Evolve with ultimately determine the final outcome; however Evolve has its fair share of problems as well.

Experienced players grouped together with random ‘newbies’ may feel deeply frustrated should they be in control of a vital team role, such as the Trapper class. This can lead to rather quick finishing games that are completely out of your control, even if you are a seasoned Hunter. Many players will also echo the same sentiment that the Wraith feels largely unbalanced compared with the other monsters, able to dominate in more cases than not. These imbalances result in games that can end rather quickly before things can get interesting. 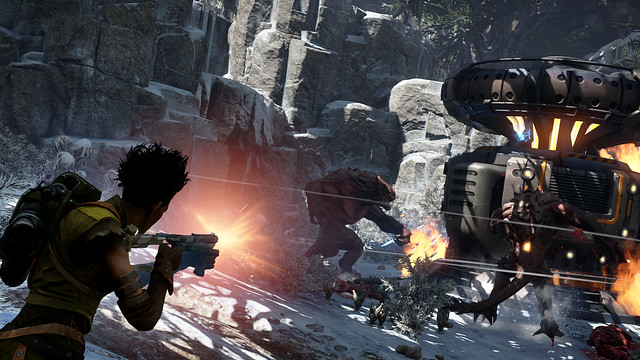 While some people may deem these reasons enough to dismiss the game, Evolve can offer some of the most rewarding multi-playing experiences you can have on a console. Some games can come down to the wire, leaving you elated with victory or disappointment in defeat. No matter what the final outcome is, you’ll find yourself wanting to get right back into it one more time. This is Evolve’s greatest strength – that addictive quality that keeps you coming back for a quick clash or even more.

The mixed discipline of each of the Hunter classes makes it a treat to don a specific role, from the heavy damage dealing Assault class, to the team-healing Medic. This level of team synergy is contagious, even when bonding with complete strangers as you all pursue a singular objective. It’s one the reasons I enjoy PvE formats in games so much, and despite Evolve’s shortcomings, it’s one of the core elements the game really hammers home.

You could argue that Evolve lacks variation and variety in its game modes, underpinned by the necessity to play with other rather than solo in single-player campaign, but Evolve feels and plays with multi-player in mind first, and single-player second. If you have a large pool of friends online already, the current stable of 16 available maps will keep you running and gunning for some time to come. 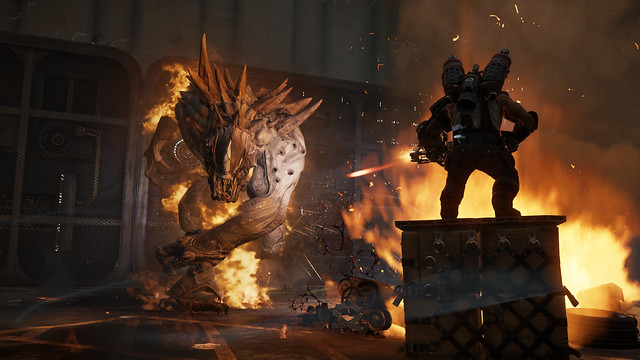 One point of contention with fans is the sheer amount of additional in-game purchases available within Evolve, most largely available from launch day. Whether or not content was deliberately sliced out to be sold in pieces later is open to debate. Although completely playable in its current state in both multi-player and single-player format, you can’t help but feel the excluded content feels a tad excessive, bordering on a paid app approach. 2K has already hinted at new hunters and monsters being available in the form of DLC down the track, which won’t please everyone who was expecting a ‘definitive’ experience straight off the bat.

Evolve is a mixed bag. There are elements that are purely brilliant and the unique approach to squad-based combat should be applauded. It isn’t an easy feat by any means to craft a multi-facet, asymmetrical game mode that caters to the taste of all FPS gamers. After being swamped by annual shooters that rarely buck the trend or mix up any formula, Evolve can take pride as a true innovator to a genre that needed a fresh take.