Etrian Odyssey is an old soul at heart. First hitting the Nintendo DS back in 2007, Atlus introduced first person dungeon exploration and blank canvas characters to the handheld device with much success. Etrian Odyssey II: Heroes of Lagaard (2008) and Etrian Odyssey III: The Drowned City (2010) followed, but was never made available in Australia. 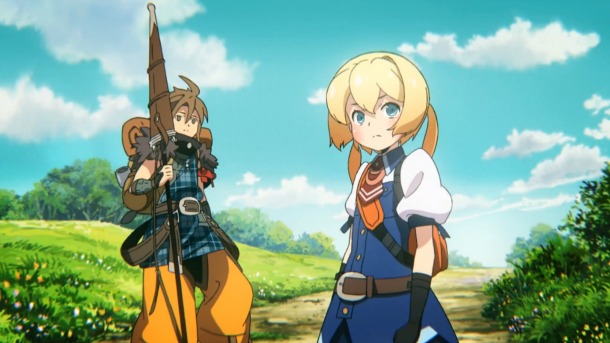 The Millennium Girl on face surface is a remake of the original Etrian Odyssey, except this time the previously customisable party members are replaced with defined characters, each with their own personalities and we’re just getting started.

It’s more of a revision or update than a remake parse, and the changes are a welcome addition. Having actual characters for Atlus to work with comes with the bonus of voice acting, storylines and character development. Adding an extra layer of complexity to the Etrian Odyssey universe, The Millennium Girl delivers an experience previously not possible with Atlus’ traditional approach. 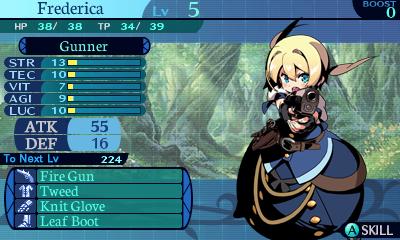 Taking on the persona of a male mercenary for hire and set in the familiar Etria world, our protagonists is tasked with finding the cause of recent earthquakes. It isn’t long until we stumble upon Frederica, a 1,000 year old girl (hence The Millennium Girl title) with a case of amnesia. Along with a trio of unlikely librarian heroes, the five descend into the catacombs beneath Etria to unlock more mysteries than one.

The storyline follows the original Etrian Odyssey while incorporating a new plot which runs simultaneously with the existing story. We’re also treated to the inclusion of cut scenes featuring your party members, helping to drive character development and immersion. Although a tad short, it is executed well enough to be considered a valid addition. The Millennium Girl poises questions on human existence, such as life, death and one’s existence, playing to the adolescent audience predominantly purchasing this genre. It doesn’t trend on topics not already presented in other titles, but will linger in your mind after the final conclusion.

For Etrian Odyssey purists, you’ll be pleased that the basic battle mechanics remains untouched for the most part. The dungeon exploration is a massive, underground labyrinth cleverly designed with plenty to uncover. The mazes are different to the original Etrian Odyssey, but retain its most interesting elements. Warp points are accessible every five floors to make replenishment a regular option, with hidden shortcuts through the many maze surrounds. 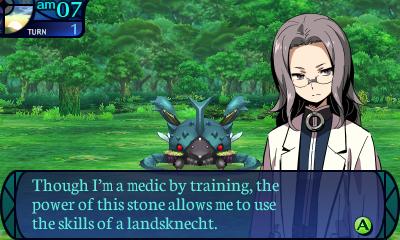 To alleviate fatigue, The Millennium Girl includes a floor jump feature for quick, speedy access to exit points once you’ve uncovered the majority of a floor. This update removes the need to walk back and forth, which I think you’ll agree is something best taken out.

Taking a page out of the simplicity of Dragon Quest combat design, The Millennium Girl scales back combat to a more basic approach. That isn’t to say the appeal of the series has been lost, as character classes and power boosts remain. New classes are introduced such as the highlander, a formidable frontline warrior and the gunner, equipped with binding, elemental and high output damage attacks best suited for back row placement. Classes are fairly balanced, complementing existing classes without feeling overpowered.

The Millennium Girl introduces Grimoire Stones to the series, a form of customisation option. Stones are fairly rare and found from fallen enemies, each stone containing skills from a foe, an ally, or combination of both. One Grimoire Stone can be equipped per party member at any one time, granting access to the skill imbued onto the stone. Stones can be fused with multiple stones to contain sought after abilities, although it can add a level of imbalance to the difficulty once you’ve established a decent set of stones for all five party members. 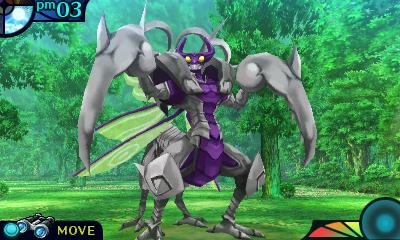 Graphically, The Millennium Girl is gorgeously refined, and dare I say a peg up from Etrian Odyssey IV: Legends of the Titan. The chatter between characters is cleverly written as the dialogue exchange between the party works with the character dynamics and never against. There’s a touch of humour thrown in, as well as the illusion of choice and despite the obvious direction the story is heading, it keeps up a level of snappy conversation from start to finish. The audio pay homage to the Etrian Odyssey soundtrack with a refreshing cover of familiar tunes in orchestrated version. There is the option to switch to the original soundtrack with its more heavily synthesized beats if you prefer.

Atlus took carefully consideration to appease all gamers by offering both a Story Mode and Classic Mode game option. Story Mode provides all the extra features, characters and updates mentioned above, while the Classic Mode retains the understated format of a classic Etrian Odyssey adventure with customisable characters and mechanics in-line with past Etrian titles from the series, while still keeping features such as Grimoire Stones and general improvements to gameplay. Completing Story Mode unlocks the pre-defined characters from The Millennium Girl for use in Classic Mode, giving you the best of both worlds. No matter which format you prefer, there’s going to be an option that best suits your gaming requirement.

Despite all the changes seemingly made to streamline the gameplay process, The Millennium Girl is still a significant time sink worthy of 80-odd hours of your time. The battles are hard-edged with tough encounters from rag-tag enemy groups to big nasty boss fights capable of decimating an entire party if you’re not careful. Yet, the challenge is all part of the appeal and you don’t get that feeling of being taken out unjustly. 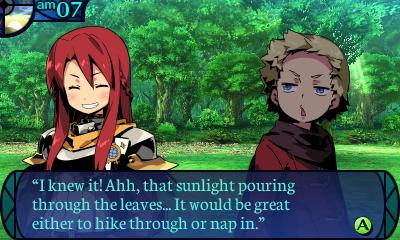 When imagining a much-loved title being reworked in order to remove all the things you hate, while still keeping the things you love, Etrian Odyssey Untold: The Millennium Girl is a glowing example of how to do it just right. The little extra touches keep it in the realm of being an improved experience, without deviating so far from the original to have fans up in arms crying blasphemy. Atlus have treated the series with care and respect, and it shows in just about every facet of the game. The Millennium Girl is a worthy title that deserves a place in your Nintendo 3DS gaming library.