Could This be the Batman Arkham Origins Collector’s Edition?

The Batman Arkham Origins Collector’s Edition may have received an impromptu reveal thanks to a promo image that surfaced late last week.

We’ve known for quite some time a Collector’s Edition was on the horizon with a dedicated Amazon.de page popping up early on. Up until now, the contents have remained a mystery. 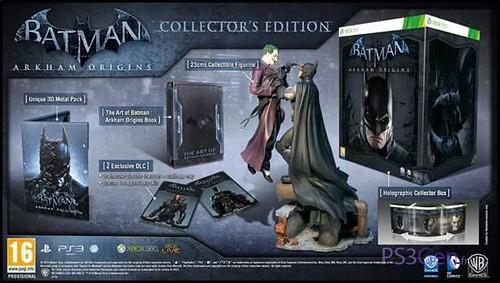 The image below reportedly is real and if true, the Batman Arkham Origins Collector’s Edition will include:

The gem in this pack is clearly the accompanying figurine, featuring the Dark Knight holding the villainous Joker over a ledge. The holographic collector box is quite unique as well as the image would appear to show that the box can be unfolded to create a sort of holographic backdrop of sorts.

PS3Gen reports that Collector’s Edition will be priced at € 99, available for the Playstation 3, Xbox 360 but not the Wii U. The PEGI rating also suggests it will be available throughout Europe.

Although it does look very legitimate, Warner Bros. have not confirmed whether this is genuine, however with the game due for release on October 25th, you won’t have to wait long to find out.

2K Games to Host Gearbox Software Presentation; The Past, Present and Future of Borderlands 2