When Borderlands first burst on to the scene back in 2009, many critics wrote the series off before it was even released. Gearbox Software “loot and shoot” first-person shooter launched at a highly competitive period against the likes of Uncharted 2, Demon’s Souls, and Call of Duty: Modern Warfare 2 the following month.

Despite the odds, Borderlands not only survived; but thrived thanks largely to its addictive looting system, tight gameplay controls, and lush cel-shaded graphics.

Naturally Borderlands 2 followed not too long after, but before the series takes a step forward, Gearbox Software along with our very own home-grown 2K Australia will be taking things half a step back with a 1.5 release in the story arc – Borderlands: The Pre-Sequel! 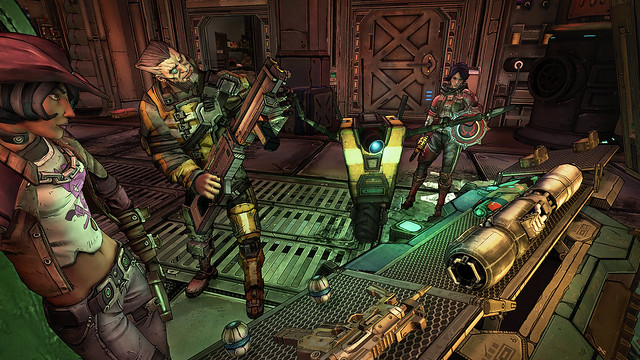 Taking place on Elpis, the moon of Pandora and set between the events of Borderlands and Borderlands 2, players take control of one of four previously unplayable characters – Nisha, Wilhelm, Claptrap or Athena. The Helios space station is captured by the military group Lost Legion. Under the command of Handsome Jack, it’s up to the new breed of Vault Hunters to reclaim control and defeat Lost Legion in the process.

That’s the generally gist of the story, although expect the same brand of Borderlands humour and style from the previous entries in the series. The Moon’s inhabitants speak with an Australian accent, with plenty of references to Aussie culture sprinkled throughout The Pre-Sequel! Australians will feel right at home, but it does make me question how the rest of the world will react to the healthy dose of Australian influences.

Handsome Jack is a standout in The Pre-Sequel! offering fans a generous look at his descent from good guy to evil madman. With approximately 20+ hours of gameplay, the rich narrative delivers a story that will have you glued from start to finish. 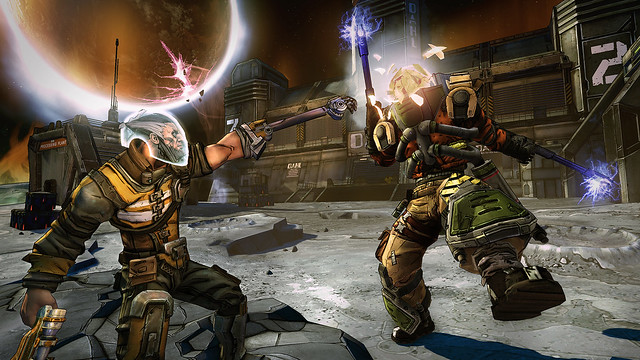 Despite a satisfying plot, the gameplay has a tendency to fall into fetch quests, as your Vault Hunter wanders back and forth satisfying objectives. It’s a little uninteresting, especially as you trek across broad landscapes which feels barren and secluded at times. The addition of new vehicles such as a moon buggy and the ridiculous fun “Stingray” hover craft takes away some of the tediousness, if only for a little while.

At its core, The Pre-Sequel! is essentially built on the same engine as its predecessor Borderlands 2. For many fans, it’s all very familiar and easy to slip back into. For others, it can feel like a piece of stand-alone DLC that will make you question whether or not The Pre-Sequel! is worth the price tag, so let’s take a look at what’s different and new to the game.

Firstly, the moon environments offer new mechanics and terrains to explore, as low-gravity environments impact your player’s movements and behaviours of choice weaponry. It also impacts your loot, causing your hard earned treasure to drift off into outer space if you don’t collect you rewards quick enough. Frustratingly evil but it does tie-in with the whole outer space theme I guess. 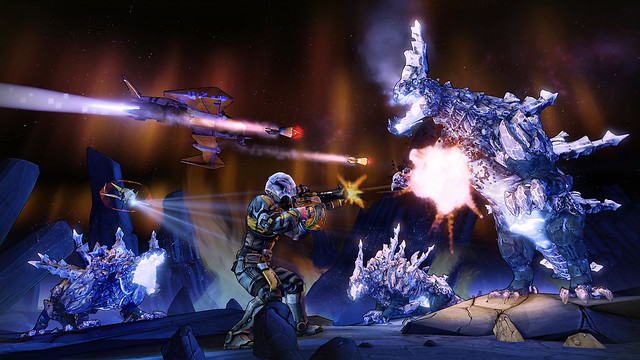 The zero-gravity environment also means oxygen tanks become a constantly depleting resource which, although fun at first, quickly becomes an annoyance as you fight to keep your Vault Hunter alive and breathing. Perhaps some players won’t mind this element of the game design, but I felt it was an unnecessary chore to constantly monitor, when all I really wanted to do was uncover “phat” loot and kill things in style. On a plus side, there are plenty of options to replenish your O2, from oxygen tanks, generators and vents.

Each of the playable characters have distinctive skill trees, making for uniquely different experiences no matter which character you choose to play as. You may even want to re-visit The Pre-Sequel! just to sample the other skills on offer given how varied and entertaining each one is to play.

When it comes to arsenal, there are loads of options in The Pre-Sequel! Choose from a wide varying range of weapons, including two brand new mechanics to play around with. Laser guns are a blast to use; in a literal sense, suitably fitting nicely within the Borderlands universe as your charges melt enemy faces in the most satisfying way possible. 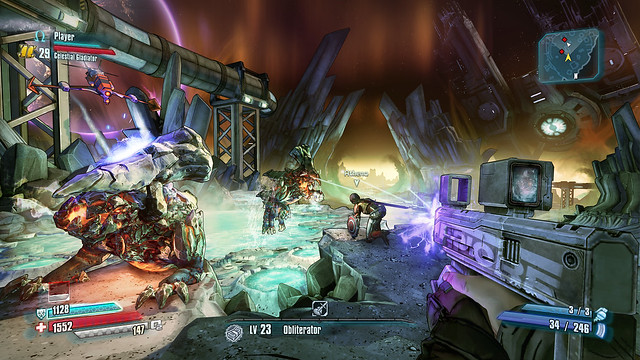 The cryogenic element, or freeze effect of temporarily chilling an enemy frozen is a nice extra, especially when your fists make contact and causes them to shatter. The new Grinder machine is a welcome inclusion, transforming two lesser qualities items in a single item of higher rarity. It’s sort of a bake your own weapon, which makes you feel like you’ve salvaged something out of potentially nothing.

Loot comes in thick and fast, with plenty of drops to customise and play around with. It actually felt like loot dropped more quickly and more often than previous Borderland titles and I for one am not complaining at their generosity.

Borderlands: The Pre-Sequel! is a competent little package and most definitely a welcome addition to the Borderlands franchise. Although let down by a few tedious elements, the new features, new weapons and reworked gameplay adds to the overall enjoyment. Having a hint of Australian flair also doesn’t hurt either. If you enjoy your rewards and killing things, Borderlands: The Pre-Sequel! could be the fix you need.