Pre-purchase the new set for a discount and bonus. 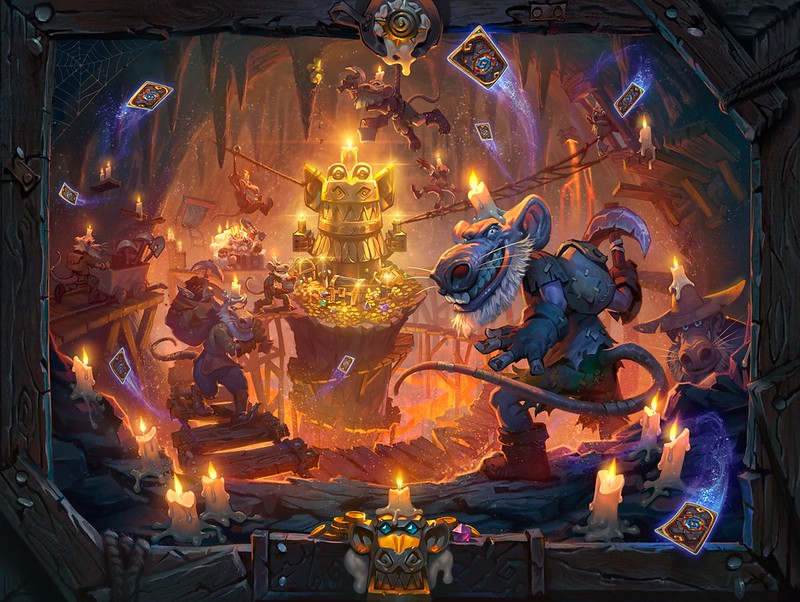 Pesky Kobolds have been tunnelling beneath Azeroth for thousands of years, uncovering and hoarding artifacts long forgotten by mortals and surface dwellers . . . but whispers of these mighty treasures ripe for the taking have begun to spread throughout taverns far and wide.

Some of the most alluring rumours speak of powerful Spellstones among the 135 cards included in Kobolds & Catacombs: enchanted items that you hold in your hand to empower before playing. Intrepid adventurers will also be able to arm themselves with one of nine new class-specific Legendary Weapons!
Players will receive one free Legendary Weapon the first time they log in to Hearthstone after Kobolds & Catacombs has launched.

The bravest and most foolhardy adventurers will need all the help they can get as they delve into Hearthstone’s free new single-player game mode: Dungeon Runs! Coming with the launch of Kobolds & Catacombs, Dungeon Runs will send Hearthstone players on challenging, high-stakes subterranean adventures inspired by the classic fantasy dungeon crawl.

Players start with a novice deck from their class of choice and face a series of progressively stronger foes, randomly selected from a huge pool of unique bosses. As they progress, they’ll bolster their decks with cards looted from defeated bosses, including some immensely powerful treasures exclusive to Dungeon Runs. Heroes should plunder with caution, however, because losing a single battle will spell the end of their Dungeon Run.

Packs can be pre-purchased ahead of launch for real money, with a special 50-pack bundle for the price of 40 (one purchase per account), which also includes a sparkling, jewel-encrusted “For the Hoard!” card back for free.

Read more about the new expansion at www.KoboldsAndCatacombs.com.