Where do I start with Ark: Survival Evolved. When I first heard of Ark, my first impression of it was it looked like a homage to the Turok franchise, but Ark is so much more than that. If anything, the game is a combination of many, many different genres and inspirations rolled into a survival adventure that doesn’t fair too badly given how much it has going all at once. 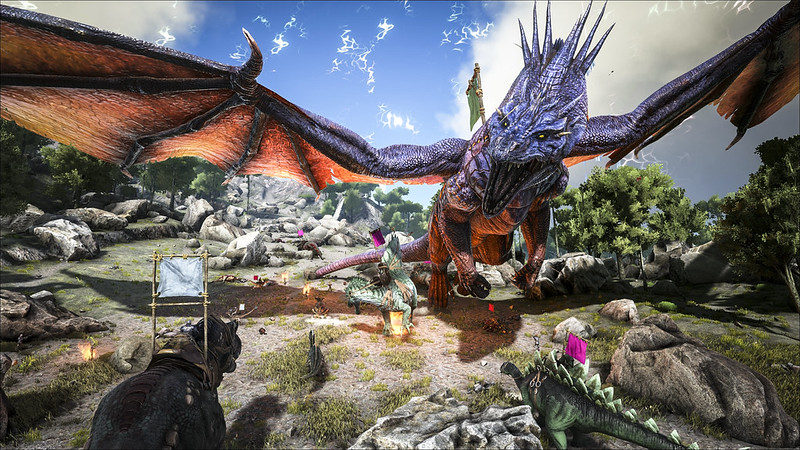 …you’ll need to survive against the harsh environment and hostile creatures that roam the virtual world, ranging from angry fishes to towering prehistoric dinosaurs.

Developed by Studio Wildcard in collaboration with Instinct Games, Efecto Studios, and Virtual Basement, Ark has been in development since 2014, followed by a hefty Early Access period on Steam. It’s been a long wait but with Ark we’re talking about a game that has elements of an open world, survival, first-person, third-person, action-adventure and role-playing title all rolled into the one experience.

Ark is played in a combination of first-person and third-person perspective, as your character is thrust head first into an open world environment known simply as the “Ark”. From here, you’ll need to survive against the harsh environment and hostile creatures that roam the virtual world, ranging from angry fishes to towering prehistoric dinosaurs. Things start off primitive and there’s very little at your disposal to defend yourself. As you progress through the game, new techniques and weaponry become available, making survival just that more bearable.

One of the biggest gripes I have with Ark is the grind. Oh. My. Goodness. The grind is very real in Ark and the curve takes a sharp exponential climb where you’ll spend way too much time grinding away for resources to craft ammunition and supplies than actually enjoying the game. And that is a real shame, as Ark is lots of fun to play when it hits its stride. 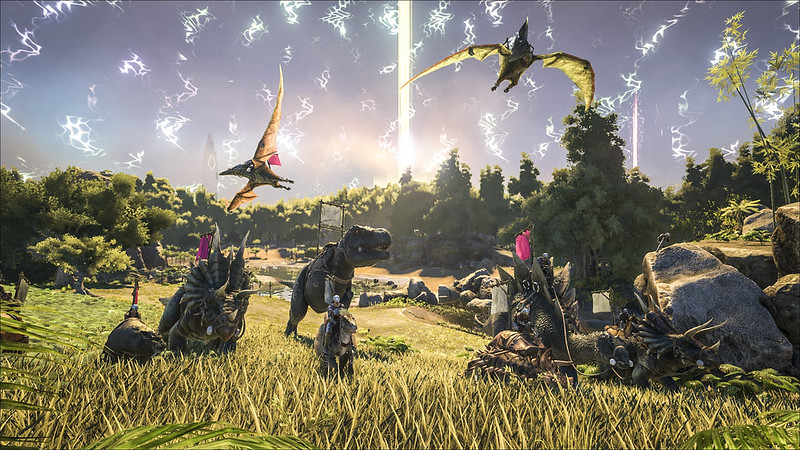 With all that resource gathering, you’ll eventually be able to build a home base and fortify it, but the constant looting by other players really takes the fun out of stockpiling supplies. If your defences aren’t up to scratch or your base is ill-placed, expect to find things stolen the next time you login, and as I mentioned, that grind for supplies is so great that it hurts more than being stomped on by an Allosaurus when you come back after a few hours to find things aren’t quite like you left it.

One of the biggest gripes I have with Ark is the grind. Oh. My. Goodness. The grind is very real…

One of the standout features of Ark for me are the dinosaurs. There’s reportedly sixty species within the game which can be tamed to do your bidding. Flying atop a Argentavis or a lumbering dinosaur companion is something out of a childhood fantasy, and when things are running glitch free it really can feel like your own Jurassic Park-like universe. You can even have a friend ride shotgun and well, shotgun enemies in the face while you take control of a dinosaur. The menagerie of creatures are truly impressive, especially seeing the prehistoric beasts with futuristic armaments. There’s a hint of Horizon: Zero Dawn going on and that isn’t necessarily a horrible thing at all.

Given the long development life-cycle, the game isn’t as polished as it could be. Glitches and the odd bug mar what could have been a rich immersive experience. There are times where the AI-controlled dinosaurs descend into brain-less brutes and will charge a rocky mountain repeatedly as you pick them off from atop. There is no attempt to flee or defend itself as I found myself taking full advantage of how simplistic it was to manipulate them, and sadly it doesn’t end there. 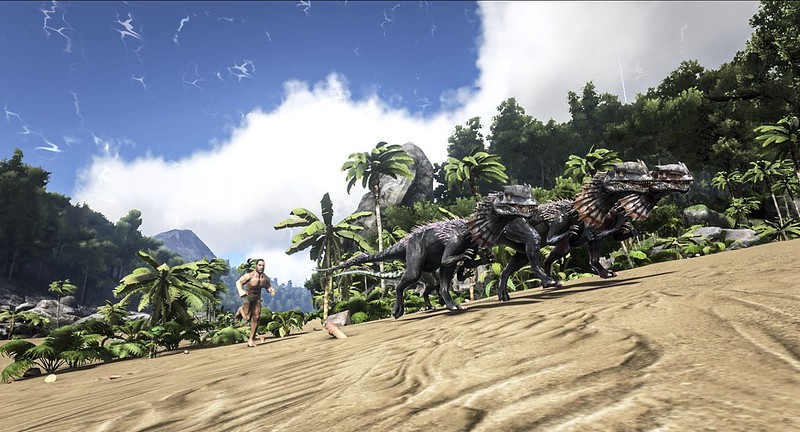 Characters and allies, particularly the larger variety can get trapped or lodged in between the environment, such as trees and foliage. It’s funny to watch the first few times, but when you’re left with no recourse but eliminate your own companion; the humour starts to wear a bit thin.

Ark does have a story and a plot beyond purely exploration and survival, with large boss battles and secrets to uncover. I wasn’t expecting a story as on face value, I honestly didn’t think there would be one so that was a nice little surprise. Ark does have end game content to strive towards so all that grinding and leveling doesn’t feel like wasted time.

I’ve read that Ark does support Virtual Reality (VR) gameplay (both Oculus and PlayStation VR), but I wasn’t able to test this out for myself. It would have been interesting to see how the developers incorporated VR immersion, but that may be for a later write-up down the line. 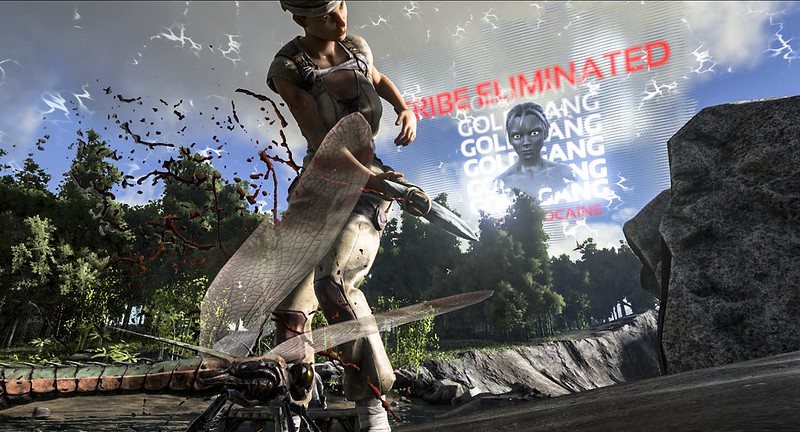 I do like that Studio Wildcard have been releasing additional downloadable content to add to the experience, with two new expansions, two new maps, and a free ‘Total Conversions’ mode already available. Hopefully this level of support from the developer continues as there’s lots of potential for Ark to expand the universe well beyond the ‘vanilla’ version.

I wasn’t expecting a story as on face value, I honestly didn’t think there would be one so that was a nice little surprise.

As mentioned, Ark does plenty of things at once, and it’s mostly positive. Combat mechanics, scavenging, farming, and building all have their unique place in the world of Ark and each present their own challenges. If you can look past the glitches, and hopefully they get rectified, Ark presents an immersive world rich with content to explore and things to do beyond a basic survival game.

Ark does plenty of things at once, and it's mostly positive. Combat mechanics, scavenging, farming, and building all have their unique place in the world of Ark and each present their own challenges.